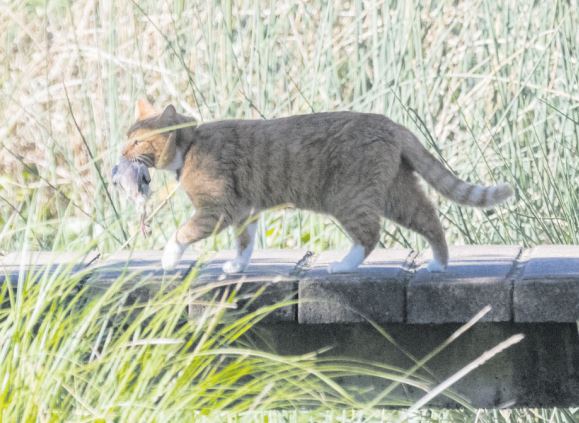 Domestic cat with a bird

Central Coast Council is to investigate the feasibility of introducing a cat curfew program for the region, amid concerns of the threat posed to native wildlife by wandering felines.

Prior to The November 11 meeting, Councillors heard in public forum from Birdlife Australia Central Coast representative, Alan Benson, who played audio of a honey eater before outlining how birds were stalked by cats.

“Cats are instinctive hunters, he said. “Confining cats is a win win for the cats and for the environment, as confined cats live longer. ” Benson said introducing a cat curfew wouldn’t solve the problem, as feral felines would remain an issue. “But it is an important step, it starts the change happening, ” he said.

Benson said identifying domestic cats as opposed to feral cats was problematic as access to microchips was difficult to achieve. A successful motion from Councillor Kyle MacGregor will see officers prepare a report on the potential implementation of a curfew.

Clr MacGregor told fellow councillors that various councils across the state and Australia were either lobbying for a change to government legislation to introduce a cat curfew or introducing their own policies on the matter.

“This was something that was raised by multiple residents across multiple suburbs across my time on Council, ” he said. “A lot of people in our community are concerned about the impact of roaming cats on our native animals, particularly birds, and exploring and developing a cat curfew will help respond to our community’s concerns and improve the lot of our feline friends across the Central Coast.

“This policy is a no brainer. “It is better for the owners and the cats, with cats living three times as long and up to 18 years if they are housed inside rather than allowed to roam wild. “I acknowledge that this will not be popular with some members of the community, but as the local council, we have a responsibility to protect the Central Coast’s native flora and fauna. ”

An amendment from Councillor Greg Best that the matter first be referred to the Companion Animal Committee for a recommendation was defeated, with only councillors Troy Marquart, Jilly Pilon and Bruce McLachlan offering support. The committee will, however, be asked for its input, to be considered along with the report.