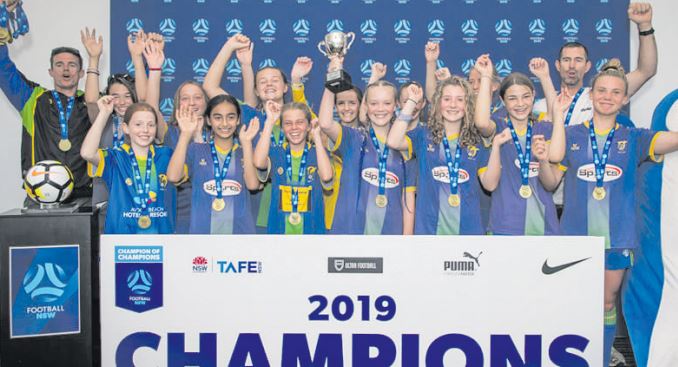 The Avoca Sharks’ Women’s 14s have finished their season on a high with a win in Football NSW’s Champion of Champions tournament.

The Sharks qualified for the tournament off the back of their phenomenal season in which they lost just one game. They won their Central Coast division title with a 3-nil win over Woongarrah in their grand final, and that sealed their entry into the Champion of Champions tournament, which started in September and wrapped up on October 20.

True to form, the Sharks blitzed their way through the seeded rounds, easily accounting for champion teams from other NSW football associations, Ponds, AC United and Gladesville Football Clubs, to meet with Avalon FC in the final. In a mirror result for their Central Coast division win, the Sharks secured their Champion of Champions crown with a 3-nil victory. Coach, Brad Mackie, said the entire Central Coast should be proud of the girls’ achievement.

“Our champion W14As have done what no other side in the club has ever done, win the Champion of Champions.

“A brilliant result from these girls. “The whole of the Central Coast is proud of you, ” he said.

Central Coast United to be a new regional representative club