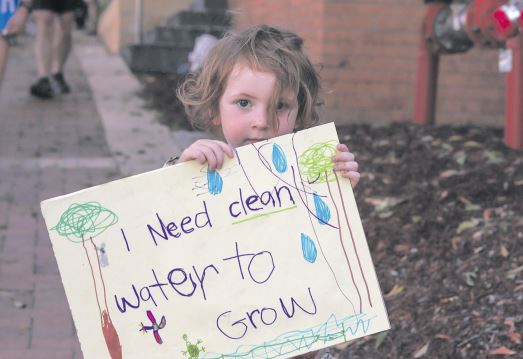 Child with a sign at the Wyong rally. Image: CEA with permissions.

Several hundred people rallied outside the Central Coast’s Council Chambers in Wyong to protest the development of the Wallarah 2 Coal Mine.

The rally, held on October 26, was organised by the Coast Environment Alliance (CEA) with several speakers presenting during the afternoon, including indigenous leader, Bruce Shillingsworth, and artist, Simone Pash.

CEA spokesperson, Emma French, said: “We were so happy to see such a big and diverse crowd at the rally. “There were many people from the Wyong area and others from all over the Central Coast that simply want to continue to enjoy the right to clean water. ”

Wallarah 2 is an underground, longwall, coal mine that received state government approvals earlier this year to extract up to five million tonnes of export thermal coal a year from the Yarramalong and Dooralong Valleys, the main water catchment area for the Central Coast. Majority owner, Kores Australia, which manages the mine under the name Wyong Coal, is a subsidiary of Korea Resource Corporation.

French criticised the NSW Coalition for what she said was a backflip on the Wallarah 2 approval. “The Liberal Government are well aware of the threat to our community’s water supply, that’s why they promised to stop it in its tracks, but as soon as they won the election, they bent to the South Korean Government and gave it the green light, ” she said.

A rousing speech was delivered by Bruce Shillingsworth, a Muruwari and Budjiti man and a water-for-the-rivers activist. Shillingsworth, who said it was time for all Australians to come together against the destruction of the state’s water systems, has led a broader campaign against what he refers to as “water stealing” by large foreign corporations involved in large-scale cotton farming and mining.

Head of Australian Coal Alliance (ACA), Alan Hayes, who has campaigned for over 20 years against the mine, presented some of the ACA’s findings on prospective mine water usage and contamination. Hayes said he “had a document produced by Wyong Coal itself that said the water catchment would lose 960 megalitres of water per year, the equivalent of 384 Olympic swimming pools. ”

“Samples of similar water taken during our campaign against Sydney Gas showed that water from the mine is toxic and not even the latest reverse osmosis technologies could make it potable. ”

Green’s Upper House member, Abigail Boyd, also spoke to the crowd and explained the new Central Coast Water Protection Bill that she has brought before the NSW Parliament. Boyd believes the Bill has some chance of success in the Upper House vote on November 21 given that the outcome may be decided by the minor parties, including the Shooters and Fishers.

She encouraged residents to go down to Parliament House on the day of the vote to show their support for the Bill and “stare those Liberals and Nationals in the face. ”