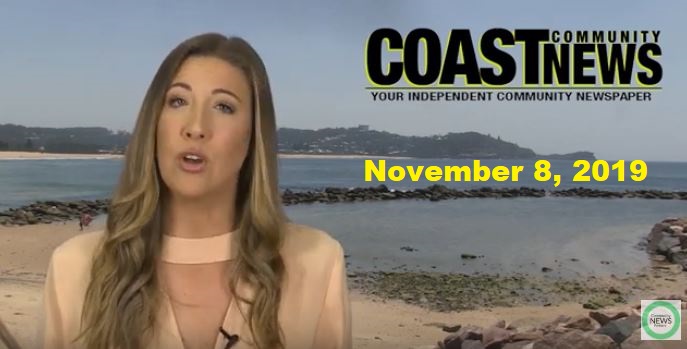 It’s been a tough week for Central Coast police this week.
On Monday, a member of the Bandidos outlaw motorcycle gang was charged over the alleged road rage assault of a Central Coast resident on the M1.
Police attached to Strike Force Raptor arrested the Bandidos member at a home in Morisset following an extensive investigation.
Separately, a Central Coast man was shot dead by police in his Erina home last Friday.
45-year-old Jason Pierce was reported to have attempted to set his neighbour’s house alight, before setting his own home on fire and then threatening police officers with an axe.
The Police reportedly fired three shots at Pierce, who died at the scene.

Central Coast Council has confirmed a clean-up of the southern end of Avoca Beach is underway after beachgoers discovered hundreds of small rocks turning up on the beach.
Complaints began rolling in when the Nippers’ season started with the rocks making for an uncomfortable experience and potential safety risk.
The clean-up is expected to be completed by the weekend.
The rocks are a result of recently completed foreshore upgrade works, including a new promenade and seating.
David Abrahams spoke to a few locals about the upgrade.

The Australian Worker’s Union has begun a campaign against the New South Wales Government’s plan to privatise NSW’s state forests including timberlands at Ourimbah, Wyong and Strickland.
The State Government is currently gauging interest from prospective buyers after similar sales of government owned forests in other states.
We spoke with Paul Noack from the NSW Branch of the AWU.

Member for Terrigal, Adam Crouch, has announced that dredging of Ettalong Channel has been completed.
The dredging works have been ongoing for the past six months and, according to Mr Crouch, around 22,000 cubic metres of sand have been removed to maintain safe boat access.
Around 10,000 cubic metres of the dredged sand has deposited on Ocean Beach to counter coastal erosion.

Long Jetty-based global sustainability group, “Take 3 for the Sea” has been recognized with a slew of international awards.
The group received the Inspiring Change Award at the 2019 World Whale Conference, followed by a Coastcare Award at the 2019 NSW Landcare Awards.
Take 3 were also named finalists for the prestigious Green Globes Lifetime Achievement Award, the NSW Government’s premier environmental award, with the winner to be announced in late November.
Take 3 for the Sea was founded by Roberta Dixon-Valk, Amanda Marechal and Tim Silverwood.

Well, after two weeks of VAR blues, the Central Coast Mariners broke through for a courageous 2-1 victory on the road against reigning premiers Perth Glory.
The Mariners took an early lead with a strike by Danny de Silva, but Glory found the net with an equaliser late in the first half.
Young star Sammy Silvera then showed a flash of individual brilliance in his first game for the Mariners to de-possess a Glory defender and slot the winning goal on the stroke of half time.

And Foxsports will have all the action in tonight’s away clash with Melbourne City which kicks off on Friday night.

Central Coast born and raised Geoff Corrigan is the co-owner of this year’s Melbourne Cup winner, Vow and Declare.
Vow and Declare was one of few Australian bred and trained horses in the prestigious race which has been dominated in recent times by international stayers.

After the race, Corrigan announced he would donate $50,000 of his winnings to Dementia Australia in honour of late The Entrance MP, Grant McBride.
A Wyong High School alumni, Corrigan said the jockey’s colours, orange and white, were also in honour of his old mate.

We close this week with an interview with one of the Coast’s oldest residents.
Nella Hickie, who lives in Erina, turned 105 this week and we are told she still enjoys crosswords, a glass of wine with dinner and telling her son Michael to tuck his shirt in.
As part of her celebration, she received a surprise visit from local MP Adam Crouch and later shared a few memories with us here at CCN.