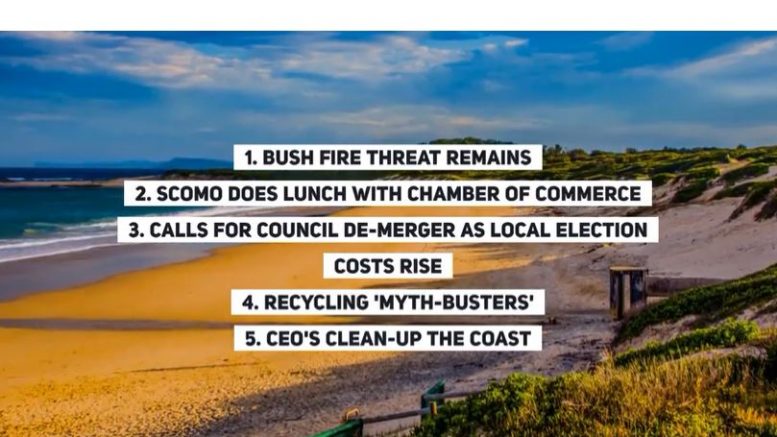 Central Coast has already endured a day of catastrophic fire danger. There were no major incidents, but many local fire brigades sent strike teams to fires continuing to burn around Lake Macquarie and northern NSW.

The RFS threw all its resources at the state’s fire disaster this week, including this Herculus bomber which dropped a load of pink retardant on houses in South Turramurra in Sydney to quell fires threatening homes. Milder conditions may give firies a breather over the weekend, but the fire danger rating remains Severe and is forecast to become extreme as temperatures rise again early next week.

PM does lunch on the Coast

Prime Minster, Scott Morrison, visited Gosford on Tuesday to attend a luncheon hosted by the Gosford and Erina Chamber of Commerce. The Prime Minister’s visit was cut short by the fire emergency, but he took the time to thank volunteers and emergency services personnel as well as the region’s many small business owners for allowing their employees to fight the fires.

Presenting to the Chamber alongside Robertson MP, Lucy Wicks, the Prime Minister acknowledged the Coast’s entrepreneurial spirit and reaffirmed his commitment to investing in the Coast.

He pointed to local infrastructure works-in-progress, including upgrades to the M1, but otherwise had nothing new to offer small business owners. . The cost of running the 2020 Local Government elections is set to increase.

The Electoral Commission has estimated the cost to ratepayers to administer the election will be $2.15 million, around 34% higher than the last poll in 2017.

In separate Council news, talks are set to return about a referendum on a council de-merger. Budgewoi Councillor, Doug Vincent, was quoted as saying people had felt excluded from the original decision to amalgamate the Gosford and Wyong Councils, while Councillor Chris Holstein asked whether a people’s vote for the role of mayor would provide stronger community representation. David Abrahams caught up this week, with Budgewoi Ward Councillor Jillian Hogan.

Over 40 chief executives from business around the coast stepped out of their board rooms and onto Terilbah Reserve at the Entrance today to participate in the Take 3 CEO Clean Up. The fundraising event, organized by Take 3 for the Sea, raised $14,000 and collected 227kgs of rubbish from the land and water.

The CEO CleanUp is part of the Take3’s ongoing mission to inspire simple actions to reduce plastic pollution in the ocean. It’s estimated that the events remove over 10 million pieces of rubbish from the environment every year with participation now across 129 countries. And still on the subject of waste, it was National Recycling Week this week and Central Coast Council has expanded its efforts to divert waste from landfill.

The Coast is emerging as a leader in waste recycling with the Council underwriting several large investments by private recyclers. The latest of these includes a contract with IQ Renew to underpin the development of a materials recovery factory in Somersby. We spoke earlier today with Council’s Manager of Waste Services about these initiatives as well as to bust a few recycling myths.

And to make it easier for residents to identify what can or cannot be recycled, the Council has developed an A-Z guide in partnership with Cleanaway that can be found at 1coast.com.au.

In sport, it’s a big weekend for the Mariners who take on Adelaide United this Saturday afternoon. The Mariners were brought back to earth last week with a 3-1 away loss to Melbourne City, but the squad is keen to avenge its loss in the FFA Cup to Adelaide earlier this year.

The Mariners will be without star trio Michael McGlinchy, Danny de Silva and Kye Rowles who are all on international duty. One player that is ready to go is former Serbian midfielder, Milan Djuric and we caught up with DJ earlier this week. And all the weekend’s soccer action is available on Foxsports.

We close this week with some scenes from Flight Warnervale airport where the Central coast Aero Club held its annual FunFlight Day. FunFlight is a national not-for-profit group that gives disadvantaged children and their families the chance to fly. That’s all for this week, thanks for joining us and we’ll see you next week for 5@5.

Rail patronage dropped by 11 per cent

What to do with Covid fines?