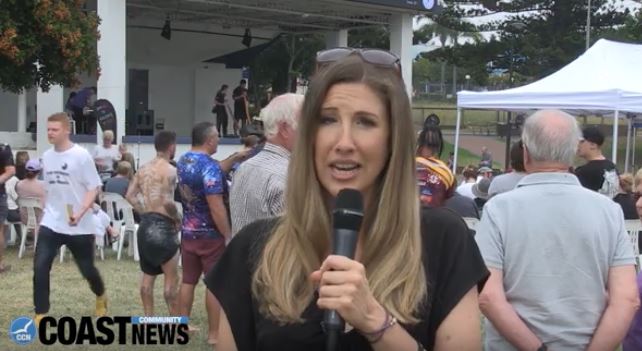 We’re reporting to you today from The Entrance, where many residents are rallying for the prevention of rape and violence against women and girls.

International Prevention of Domestic Violence Day at The Entrance

It was International Day for the Prevention of Violence against Women on Monday, a day set in honour of the Mirabal sisters, three political activists from the Dominican Republic brutally murdered on this day in 1960 for their stance. It marked the start of 16 days of action.

The United Nations has released some startling figures that show that: 1 in 3 women and girls in the world experience physical or sexual violence in their lifetime; that 750 million women and girls alive today were married before their 18th birthday; and that in 2017, 1 in 2 women killed worldwide were killed by their partners or a family member.

Perhaps an even more disturbing is the fact that the Central Coast has one of the highest rates of domestic violence in Australia, which makes this event even more important.

We have one of the event co-ordinators, Danielle Habib with us this morning. Danielle has worked in the Domestic Violence and Community Development sector for many years, working with refugees and asylum seekers, including women and families in Africa and the Middle East.

Danielle is also the Chair of the Central Coast White Ribbon Committee.

Major roadworks across the Central Coast are expected to be completed by 2025 thanks to a $70 million packaged fully funded by the Federal Government Councillors approved 29 road projects from the Peninsula area to the far north of the Coast.

The largest project will be the long-awaited $11.3 million upgrade of Steyne Road at Saratoga incorporating new pavement, kerbing and drainage. The package delivers on a pre-election promise made by the Coalition earlier this year as part of its broader focus on congestion-busting and road safety.

Friends of the Performing Arts Precinct is putting renewed pressure on council to press ahead with earlier plans to build the Regional Performing Arts Centre on the site of the old Broadwater Hotel in Mann St. The project was put on hold in September when the Council abandoned its plans for a cultural precinct and decided to move forward with just a regional library on the Parkside site in Donnison St.

The matter is set to be tabled again for discussion by Councillors in coming weeks. Newly returned FOPAP President, Barney Waters, said the existing Council owned theatres, the Wyong Arthouse and the Laycock Theatre were fabulous venues, but did not have the acoustics necessary for high-end operatic or orchestral performance and training.

Mariners notch up a home win

The Central Coast Mariners enjoyed their first home win of the season after a 1-nil win over Western United on Sunday. The winning goal by defender Giancarlo Gallifuoco was also the Mariners’ 500th goal since joining the A-League.

The win sees the Mariners move into sixth on the A-League ladder as they prepare to take on Brisbane Roar in Brisbane this weekend. It was also the first time the Mariners have kept an opposing team scoreless in 38 matches and while there were many strong performances across the team, the standout was, without a doubt, goalkeeper Mark Birighitti. And just for something different, the Mariners had two VAR decisions go their way this time.

Warnervale and Lisarow-Ourimbah have been confirmed as the finalists for the Central Coast Cricket Association’s First Grade One-Day Grand Final. Warnervale was one of several clubs in contention for the second grand final spot and sealed their place off the back of a bonus point win over Terrigal-Matcham. Opener Simon Keen scored an electric 76 runs off just 58 balls to set up that win for Warnervale. And that decider will be at Erina Oval on Sunday.

Gosford and Wamberal-Terrigal Little Athletics Clubs had a surprise visitor over the weekend when Olympic gold medalist, Sally Pearson, dropped in to say hello. The two clubs had come together to test out some new hurdles secured through a grant via Coles Supermarkets, with the two-time world champion stopping in to offer some advice and give the new hurdles a workout.

We close this week with an amazing story of Clean4Shore’s facilitator Graeme Johnson. Last weekend, Johnson and a team of students from Brisbane Water Secondary College’s Woy Woy Campus removed 320 kilograms of rubbish from the Mangroves near Woy Woy Railway Station. Johnson established Clean4Shore 9 years ago and, three days a week, takes a crew out to his barge to clean up our waterways of anything from packaging and soft plastics, to tins, oyster racks, car tyres and discarded kayaks and boats. That’s all for this week.

We hope you like our first new-look Coast Community News that hit the streets this morning. That paper will now be available weekly from Friday mornings.

Thanks for joining us at we’ll see you next week for 5@5.

A full archive of our local 5@5 Video News, Interviews and Spotlight stories can be found here at our news website.

ACF calls on all candidates to support tree policy

Unemployment on the rise on Central Coast

Kincumber Avoca pick up their first win of the season