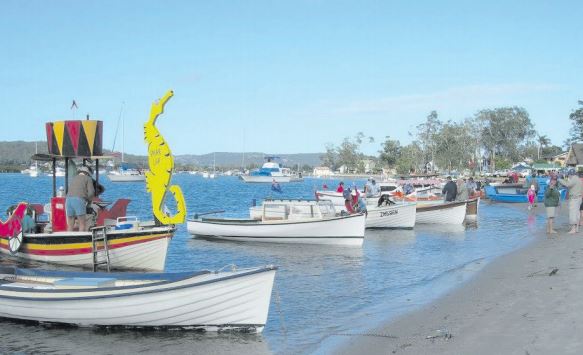 The Putt Putt and wooden boat regatta at Davistown.

The people of Davistown are preparing to celebrate the 20th anniversary of a very special community event when the Davistown Putt Putt Regatta and Wooden Boat Festival returns to the waterside suburb on October 20.

The annual event has been coordinated by a group of dedicated locals for the past two decades to pay homage to Davistown’s rich history as a hub of boat building and regatta racing.

Festival committee member, Neil Mulcahy, said the genesis of the festival was the social and competitive gathering of Putt Putts by the early builders, residents and boating enthusiasts of the district. Regattas were often held at Davistown in the early 1900s.

Challenges between boat owners/builders were designed to determine who had the fastest Putt Putt, or who could row the quickest. Reintroduced as an annual event via a quorum of enthusiasts in 1996-97 as just a regatta, the event grew exponentially and was reintroduced to the community as the festival in 2012, and is now one of the principal events on the Central Coasts calendar, Mulcahy said.

To mark the milestone anniversary, the Committee will be pulling out all the stops with more family friendly fun on offer than ever before.

Mulcahy confirmed that this year the festival will be focused into four specific event precincts: Childrens, Markets, Food, and a Marine Precinct. “While the Regatta has always had amusements for the kids, this year we are making some changes. Along with the ever popular mini jeeps and Duckland, we are adding some different attractions.

“We will have Zorb Balls, a Carnival Slide, and the Wipeout Challenge. The ever popular Laughing Clowns will also be present, so bring the kids and enjoy the Childrens Precinct at the Davistown Illoura Reserve. The NSW Corp of Marines will also be present throughout the day and they have always been a hit with the kids”, Mulcahy said.

“We are most excited about the Marine Precinct which will bring together all of the boating and boating related service areas from our community and of course a number of goodies and special offers will be available in the Market and Food Precincts, Mulcahy said.

“Along with the traditional Putt Putts, this years festival will also be highlighting the Wooden Boat part of the event charter with the appearance of a number of boats from the Sydney Heritage Fleet and a series of other historic timber boats.

“There will be opportunities to take a ride on these fantastic old vessels and Central Coast Ferries will again be present with the venerable old Codock II”, Mulcahy added.

The annual Putt Putt Charity Dinner will also return to the Davistown RSL on October 18. A relatively new event to the Regattas offerings, the Charity Dinner is a way for the Committee to thank the Davistown business community that help bring the festival to life each year, either through sponsorship or via donation of Regatta prizes or other resources, as well as the locals who always turn up in droves to support the event.

This evening of dining, dancing, entertainment, raffles and silent auctions has proved to be a great night out over the last two years and this years event will be no exception. Music will again be provided by Kristie Coote and her band with all proceeds from Charity Dinner ticket sales to go to the Kids with Cancer Foundation Australia.

Representatives from the charity will also join us this year and will speak about the work they do and the value that events such as the Charity Dinner bring to them, Mulcahy said.

“Racers will set off from Lions Park at Woy Woy and make their way to the finish line at Gosford Sailing Club. This will be a great opportunity to show off our old boats and blow out the cobwebs with a run down Paddys Channel”, Mulcahy said.

The festival proper will get underway from 9am on the 20th and will take over Illoura Reserve and the Davistown Waterfront. The Festival Committee encourages all Central Coast residents to attend for a great day out.