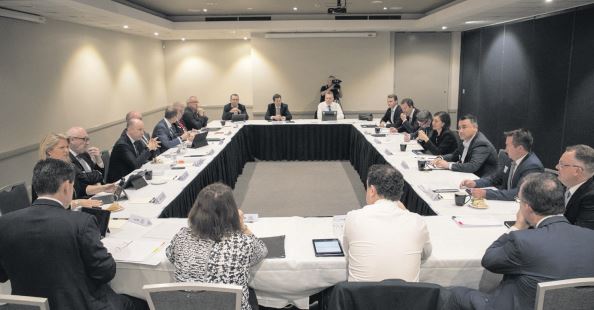 The NSW Cabinet in their meeting at Mingara, after the community morning tea.

Mayor, Lisa Matthews , deflected criticism levelled at Central Coast Council last week by NSW Premier, Gladys Berejiklian, by renewing calls for the State Government to commit funding from overflowing coffers to key projects in the north of the region.

While the Premier and 23 of her Ministers were on the Central Coast last week for a Community Cabinet meeting, Berejiklian lashed out at council, accusing it of sitting on their hands and risking the loss of $10M state funding if council didn’t “hop to it” and present a plan for a Regional Arts Centre in Gosford.

She and Arts Minister, Don Harwin, had just announced $2M for the Central Coast Conservatorium of Music as part of a 2015 promise of $12M for performing arts on the coast. A proposal for the arts centre has stalled while council reviews plans.

Meanwhile, the Mayors focus was on the State Government committing funds to the second stage of the Regional Sporting Complex at Tuggerah, the Warnervale Link Road, Gosford CBD revitalisation, job creation and support for TAFE.

The state governments Central Coast Regional Plan 2036 identifies Warnervale as a regional growth centre, anticipating 75,500 more residents by 2036. Warnervale Link Road is a proposal for a 2.3km link between Wyong and Albert Warner Dr at Warnervale including a bridge over Porters Creek Wetland.

“Central Coast ratepayers alone cannot bear the burden and we simply do not have enough funding for this significant growth corridor”, the Mayor said.

“If we are expected to deliver services and new infrastructure for another 70,000 people by 2036, we need the state government on board and at our side to deliver on priority projects for the community.

“State Government coffers are overflowing and it would have been great to see more funding announced for the Central Coast rather than more talk.

“This is a missed opportunity for the State Government to show us their commitment to our region. I wont give up though”, the Mayor said, I will continue to fight for our region and our community to ensure we get the funding we deserve.

“We need all levels of government to work together hand in hand with our community and move our region forward”.

The Entrance MP, David Mehan, also took issue with the Premier’s criticisms. “I have always tried to work constructively with Council for the benefit of the Central Coast and my constituents”, Mehan said.

“Having taken over planning for the Gosford CBD, the State Government must shoulder some responsibility for progress in that part of the coast where planning decisions have only been directed at encouraging a select few property developers to develop their discrete sites”, Mehan said.

The Community Cabinet met at Mingara Recreation Club at Tumbi Umbi by invitation only, creating some criticism across radio and social media about the level of community involvement in the meeting.

A spokesperson for the NSW Department of Premier and Cabinet said invitations for the Community Cabinet morning tea were extended to about 170 community leaders from the Central Coast area, representing a broad cross section of the community including volunteer groups and associations, clubs, service organisations, Chambers of Commerce and Tourism and local government.

‘Invitations for the event are limited, taking into account practical considerations such as venue capacity, the spokesperson said. Representatives from key community organisations spoke directly with the Premier and Ministers about issues faced across the wider community and shared ideas on how to strengthen the local area’.

They raised the need to review the timeline for the expansion of the Pacific Highway through Wyong as a matter of priority. As the fastest growing area of the Central Coast, we need jobs, Martin said.

With a lack of progress to develop the northern growth corridor, including the development of business precincts to encourage innovative businesses, there will not be enough jobs to service our growing number of residents.

Chairman of Darkinjung Local Aboriginal Land Council, Matthew West, said he had a very positive meeting with the Premier.

“It reaffirmed the support Darkinjung is enjoying from all sides of the political spectrum in its efforts to enrich the Central Coast community by building homes, creating jobs and securing education and training opportunities for all those living on the Coast”, West said.

“She was aware of how closely we are working with her government on the likes of the Darkinjung Delivery Framework, the game-changing set of planning measures introduced earlier this year that are helping us achieve greater economic self-sufficiency from our lands”.