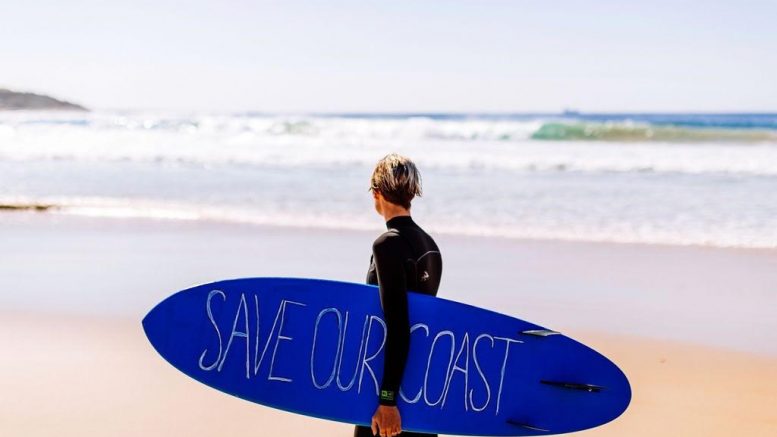 A scene from the short film South Fish with international surfer Belinda Baggs.

Southfish, a new short film about ocean seismic testing, will be shown at session held by Save Our Coast at Everglades Country club on November 6 at 6.30pm.

Produced by NSW surfer Ms Belinda Baggs, in collaboration with local group Save Our Coast, the short film features local surfers, scientists, and fishers, with music by Ziggy Alberts.

After the screening, Save Our Coast will hold a “petroleum exploration update” and answer questions about the campaign to stop oil and gas rigs off local beaches.

This will include information about the Senate Inquiry into seismic testing that has commenced in Federal Parliament. The panel will include local groups Peninsula Environment Group and Community Environment Alliance.

“We’re convinced that most people on the Peninsula don’t want to see gas rigs off our coast, and would be horrified at the impact of seismic testing on marine life such as whales and dolphins, ” said Peninsula Environment Group’s Mr Mark Mann,.

“In May this year, 1800 locals held hands along Umina and Ocean beaches in a moving gesture to send a message to politicians and industry that they valued their coastline highly.

“Australia is the largest gas exporter in the world and yet we have the highest gas prices to homes and industry. “Gas supply is not the issue. Failed government regulation has brought us to this point, ” he said.

“We were delighted to be able to collaborate with Belinda to raise awareness of this threat to our coast from seismic testing and offshore oil and gas.