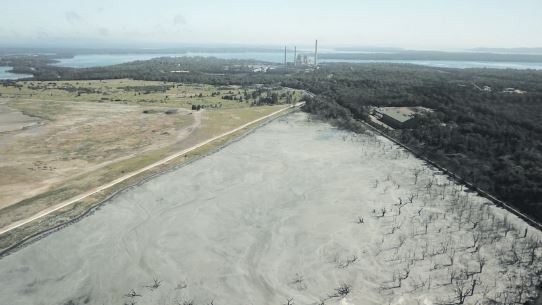 A Parliamentary Inquiry by the NSW Public Works Committee will examine the legacy of toxic coal ash from power plants.

The Inquiry will accept public submissions until May 2020 and report its findings by July next year.

“Coal ash is nearly one fifth of our total waste output and people in NSW deserve to know how the government plans to deal with it, ” she said. The Inquiry will cover the costs of remediating toxic coal ash dumps including Vales Point, Eraring (both on Lake Macquarie), Mount Piper, Bayswater, and Liddell power stations and the prospective timing of government expenditure to remediate these ash dumps.

Spokesman for Vales Point Power Station, Steve Gurney, said the ash dam has been progressively remediated and he disputed “the inference that it was a toxic cesspool … it’s nothing like that”. [past story here]

Gurney said progressive remediation of the ash dam has been undertaken since the power station started in the 1960s under NSW government ownership and has continued since December 2015 when Sunset Power International bought the station. “A baseline study showed the ash dam was in good shape and there was no leaching into Lake Macquarie. “The ash dam has been capped over the years as operations have gone on and now there is useful land and Delta’s solar farm will be built on part of that, ” Gurney said.

Greens MLC Abigail Boyd said: “We know from sales documents obtained by the Greens that the state government retains the bulk of the liability for remediating these polluted sites.

“The Greens are concerned that the government is putting off closing these polluting power stations because that will trigger potentially billions of dollars in cleanup costs. “Importantly, the Inquiry will also examine the economic and employment opportunities associated with coal ash re-use, site remediation and repurposing of the land.

“NSW needs thousands of good jobs and dealing with coal ash responsibly may provide a win-win for coal communities as well as the environment, ” Boyd said.

“Coal ash is an enormous toxic legacy issue for Australia that largely flies under the radar, despite it being one of Australia’s biggest waste problems and a huge risk to human and environmental health. ” Lipski said.

“There is a disturbing lack of information about coal ash dumps in the public domain in NSW, and this inquiry should provide a lot more information about how they are regulated, who is responsible, who’s footing the bill, and what comprehensive rehabilitation and closure planning should look like. ”

Public submissions can be made online at parliament.nsw.gov.au/committees/inquiries