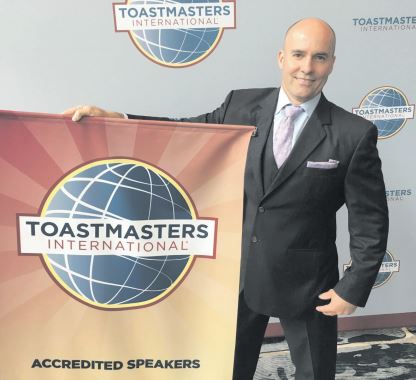 The order is the highest level in the Toastmasters organisation with just over 80 Toastmasters ever given the title. Mr Van Borssum was honoured for his work as a youth mental health speaker and service advocate through his suicide prevention charity and motivational speaking business, Mind Warriors Foundation.

His interest in mental health came at a low point in his life. He had been working as the fight choreographer and weapons advisor for the film Mad Max: Fury Road when its production stalled and, along with everyone else, Mr Van Borssum was laid off.

Out of work, he had to sell his home and took on a job as a labourer on the Barangaroo development in Sydney. It was very mentally and emotionally jarring, having gone from working on academy award winning films with Hollywood elites to shovelling mud out of a shaft, he said.

I couldn’t escape the feeling of shame. Not long after coming to terms with his own situation, a co-worker committed suicide in front of Mr Van Borssum and other workers by jumping from the Barangaroo building. It was in the aftershock that Mr Van Borssum first learnt how powerful his words could be.

A group of workers got together to talk about what had happened and how we were coping, he said. I led the discussion and encouraged anyone struggling themselves to speak up. Six guys did and all six got the help they needed. With his newfound passion for speaking, he joined the Sea Eagles Toastmasters Club of Sydney.

That’s what did it for me, Mr Van Borssum said. After a few more months in limbo, production recommenced on Fury Road and Mr Van Borssum got his life and career back on track. The film would go on to become the highest grossing action film of 2015.

Mr Van Borssum has since gone onto become a celebrated international keynote speaker, an ambassador for Lifeline and is still working in the film industry.

Of his award Mr Van Borssum said he was honoured to be considered among the Toastmasters elite and that he hoped it would help him continue to get his message out about Mind Warriors which combines mental and physical wellness in one wholistic approach to better health. I

‘ve always believed it doesnt matter where you come from its where you finish and if Im able to help someone having a hard time with my story then Im happy, Mr Van Borssum said.