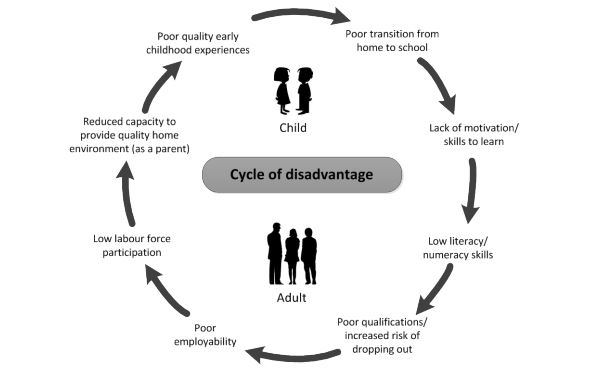 Cycle of disadvantage as visualised by the Productivity Commission

Central Coast Council has heard that Woy Woy, Blackwall, Ettalong, Umina and Booker Bay were considerably socially disadvantaged compared to many other parts of the Central Coast.

A report from the council chief Mr Gary Murphy said there was a social divide between the north and the south of the Coast.

The report stated that the Australian Bureau of Statistics Index of Advantage and Disadvantage showed the Central Coast local government area in 2106 had a relatively average index of 989. But within the Coast, smaller areas were worse off with a lower index .

Woy Woy and Blackwall had an index of 931.8, while Ettalong and Booker Bay scored 937.4. In the March quarter of 2019, the Central Coast had an unemployment rate of 5.3 per cent compared to 4.5 per cent for NSW and 5.2 per cent Australia.

The Peninsula was consistently worse than the Coast average, with 7.3 per cent unemployment in Woy Woy and Blackwall in the March quarter and Umina and Booker Bay having 6.7 per cent.

Despite the north-south divide, Wyong had the worst social disadvantage index on the Coast at 859.7 and the highest unemployment rate at 11.6 per cent.

The report was written to support the Councils call for an increase in Newstart and Youth Allowance rates.

This article appeared first in the Peninsula News September 30, 2019