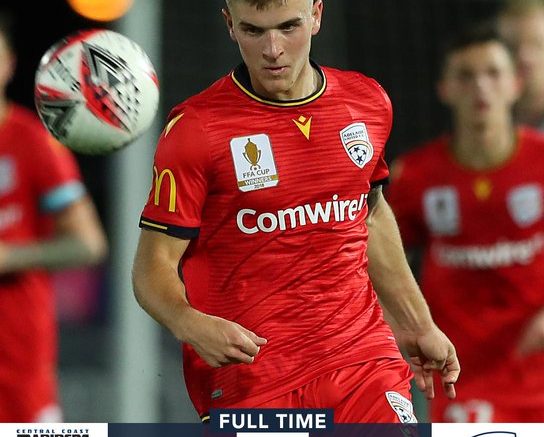 [Gosford] Central Coast Mariners were defeated by Adelaide United 1 goal to 2 in the 2019 FFA Cup semi-final at Central Coast Stadium.

It was fast, free flowing football at the start with both sides not afraid to throw players forward in attack.

Adelaide found numbers on the counter however the Mariners defence restricted the Reds to half chances on goal.

The best chance of the first half fell to Sam Silvera, as the promising attacker saw his header blocked on the line into the crossbar. Silvera continued to look lively on the ball throughout the game and looked like a threat as he was able to create chances for the yellow and navy.

Adelaide had a great chance themselves through Riley Mcgree however his attempt was blocked by Kye Rowles.

Tempers started to flair towards the end of the half, but the referee called an end to a very open and entertaining half of football. It was a scrappier affair in the second half as both sides struggled to find a rhythm.

Adelaide were first to have a chance with striker Kristian Opseth striking the post after a low delivery into the area.

The Mariners were quick to have a chance of their own through Jordan Murray, but his effort was saved by the on-rushing Isaac Richards. The deadlock was finally broken in the 62nd minute though when Jack Clisbys set piece delivery evaded everyone and found its way into the goal.

Adelaide fought hard for the equaliser and hit the crossbar through George Blackwood and with just under 20 minutes to go the Mariners were reduced to 10 men when Matt Simon received his second yellow card.

Adelaide took full advantage and in just two minutes later, Blackwood thumped home Nikola Mileusnics cross from close range. Adelaide looked dangerous on the attack and a cross by McGree was glanced into the side netting by Mileusnic.

It looked like the game was heading into extra time until McGree converted his one on one effort in the 90th minute to secure the victory for the away side.