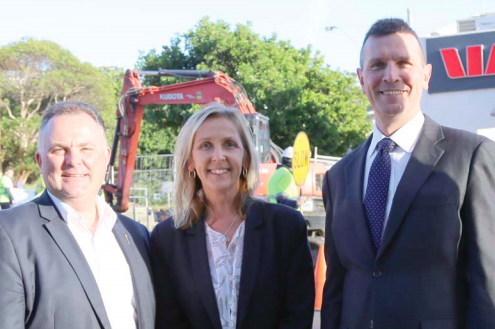 Central Coast Council has failed to bow to what one Councillor referred to as bullying and meet with Member for Terrigal,

Adam Crouch, who has claimed the Council is in chaos. Crouch has slammed Councils decision to relinquish $4.6M in State Government funding for the Winney Bay Cliff Top Walk project and pursue other design options.

His comments were backed by Premier Gladys Berejiklian during a visit to the Coast on Monday. Berejiklian accused Council of sitting on its hands over a proposal for a Regional Performing Arts Centre in Gosford and risking the loss of $10M promised by the State Government for the project in 2015. “It wont be the first time they have handed money back”, she said, in direct reference to Winney Bay.

Councillor Greg Best put a motion to the Council meeting on September 25 that Councillors should seek a meeting with Crouch to re-establish a congenial working relationship and was backed by Councillor Bruce McLachlan, who said it was important to have a good relationship with the Coast’s only Liberal MP.

“We do only get a third of our money through rates so we need funding from government grants”, he said. But other councillors disagreed.

Councillor Kyle MacGregor said the real purpose behind Crouch’s criticism was to get a headline and it had done that.

“The real purpose is to be inflammatory”, he said.

“We wont be bullied”.

Councillor Louise Greenaway said she was disappointed and sad to see the motion, which carried the heading ‘Council Seeks to Avoid Dismissal’ in the business paper. “The only way we can be dismissed is if the Minister recommends it after a public inquiry, or ICAC recommends it”, she said.

We weren’t in disarray or chaos about the Colorbond fence, we listened to the community. Same with Winney Bay. This is about trying to listen to and communicate with the community.

“This (motion) does the community a disservice”.

Councillor Chris Holstein called the motion “a classic” and put an amendment that the Mayor and CEO meet with Crouch regarding his media release on September 9, in which the inflammatory remarks were made.

“The press release did say there is a state of chaos and we need to have a conversation about that”, he said.

The amendment was lost 8-6, with Mayor, Lisa Matthews, saying it was her intention to invite all the local MPs to a meeting for a fruitful discussion in the early days of her term. Clr Matthews said Crouch was just one of the regions four MPs and Council should build good relationships with all of them

“This State Government forced the council amalgamation and I don’t think they got what they thought they would, a council which would adhere to all their rules”, she said.

“One year out from the next council elections, it is in the interests of some to portray us as a council in crisis, but we will put the wishes of the community first”.

The original motion from Clr Best was also lost.