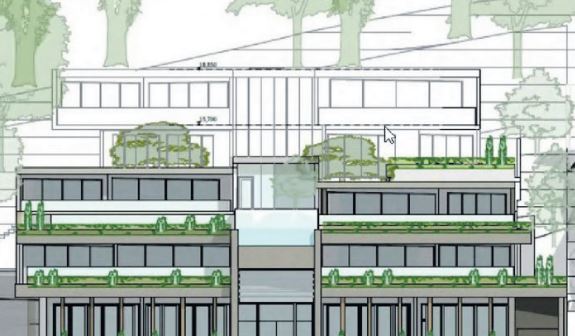 Concept art of the development at Hardys Bay

A so-called “shop top” development worth $4m has council approval to build at 58-62 Araluen Dr, Hardys Bay, despite a push by deputy mayor Cr Jane Smith at the October 8 meeting to challenge the definition.

Cr Smith wanted more advice on what constituted shop top housing, arguing that the seven units on top of the four shops were actually behind the shops, further up the hill.

The site opposite the foreshore reserve at Hardys Bay has a long history with one development proposal being ruled out by the Land and Environment Court and another one winning council approval still current. It is owned by Boutique Hardys Bay Pty Ltd.

Cr Smith had also asked the question of the planner for the development at the earlier public forum but he couldn’t answer off the top of his head. When the amendment was put to the vote, only councillors Greenaway, Sundstrom, Hogan and Vincent supported Cr Smith’s push for a deferral until they defined what shop-top meant.

Ward councillors Richard Mehrtens and Chris Holstein voted with the majority to pass the development and Cr Troy Marquart was not at the meeting.

The proposal , submitted by Architexture Australia, attracted 97 submission objecting to such variations as the height which is above guidelines by 12.1 per cent.

Two of the units will have four bedrooms and five units will have three bedrooms. Objectors complained that 19 car parking spaces were not enough for both the units and the four shops. Four people spoke at the public forum on the issue; two for the approval and two against.

Wagstaffe-Killcare Community Association president Mr Mike Allsop talked about the problems of parking which he didn’t think the area could accommodate. “We welcome the commercial development but the approval should include conditions to increase parking to the level required for the size of the residential units, ” he said.

Hardys Bay Residents Group president Mr Adrian Williams said the development didn’t fit the character of the area any better than the one that the Land and Environment Court knocked back.

He said his group believed the development should be refused on similar grounds.

Developer’s planning consultant Mr Michael Leavey said it was a very different proposal to the one refused in 2010. He said it was consistent with the desired future of the area and it fully met the development control plan requirements. Another person who worked on the design, Mr Darren Tye spoke about the latest design and how the key factors were to minimise excavation, preserving the amenity of the area and the neighbours and using the style of the existing approval as well as consulting with the community group.

“We feel we were pretty successful in achieving an outcome that ticked those boxes, ’’ he said.

In 2008, Gosford Council refused an application for four shops and nine units and a subsequent appeal was dismissed by the Land and Environment Court in 2010. In 2011, Gosford Council approved two shop and two twostorey four bedroom units above with a detached recreation room containing a gym and pool located higher on the site. That approval has had physical commencement with site clearing have taken place and the approval is still current.

Don’t light fires on the beach