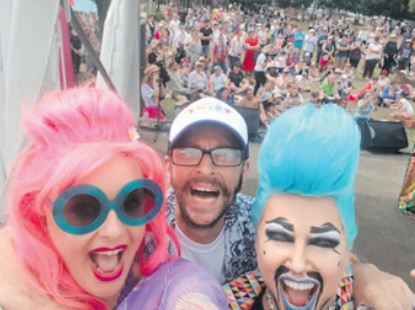 The first Coastal Twist event exceeded the expectations of organisers.

The three day and night Coastal Twist festival over the October long weekend saw three times the numbers that organisers had hoped to attend.

Spokesperson Ms Glitta Supernova said about 6000 people attended with an even split between locals and visitors. “Data collected from hundreds of surveys which were taken from more than 40 volunteers across all events highlighted an even split of 50 per cent local crowds and 50 per cent from across NSW, Queensland, Northern Territory and Melbourne, ’’ Ms Supernova said.

The festival held six events across three days and all events were sold out. Festival organiser Mr Juan Locco said their web servers crashed due to incoming traffic and line ups at all local venues with people hoping to enter and buy a ticket on the day.

“The line-up outside the Woy Woy Leagues and down Blackwell Rd will stay etched in my mind for a very long time, ” he said. Twenty three small businesses across Umina Beach, Ettalong Beach and Woy Woy entered into the window display completion. “In the end a total of 43 shop windows had engaged, ” he said.

“Not only did Coastal Twist entertain with adventurous, unorthodox productions and pioneering artists, scholars, and game-changers but we offered audiences of every age, ability, and gender, sexuality uncommon offerings that can, and often do, reshape and expand worldviews. ”

“This weekend has been a part of the first steps towards disarming the thinking that difference is somehow bad, difference is not only normal but the biological basis of every living and breathing thing. ”.

This article appeared first in the Peninsula News print edition 480.