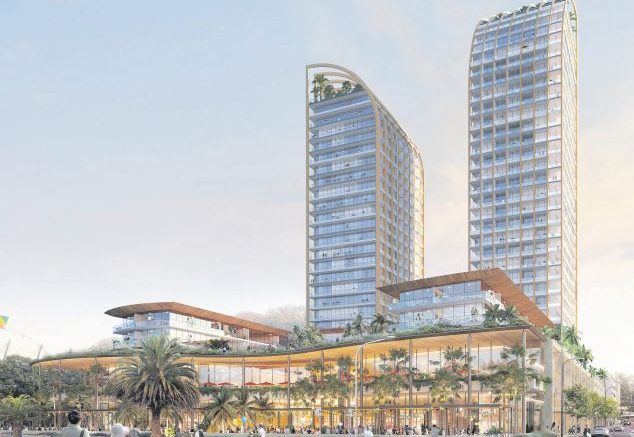 An artist’s impression of the proposed redevelopment

Central Coast Leagues Club has unveiled plans for a $440M redevelopment and has applied to the NSW Department of Planning for approval as a State Significant Site.

The club has set the ball rolling with a request for Secretary’s Environmental Assessment Requirements from the department, with its latest Masterplan highlighting two stepped hotel towers on a podium at the north of the site, a public accessway through the site from Baker Street to Dane Drive; a basement carpark and an open plaza adjacent to Georgina Terrace and fronting Leagues Club Field.

Documents lodged with the department say the two multi-storey towers have been designed to complement the natural topography of the ridgelines that frame Gosford and to allow maximum sunlight access to the adjacent Leagues Club Field.

The towers, which will be of different heights, will have floorplates equal in size, but shaped to allow sunlight access to the public domain of the southern plaza. The documents say the towers are oriented to welcome people to Gosford while acting as a point of reference due to their sculptural forms.

They will be located along the spine of height which is developing in the city centre, but will retain views to the ridgeline of Rumbalara Reserve. The architectural concept is defined by the relationship between the predominant horizontal elements of the site including the water, park, street wall and nearby Central Coast Stadium, punctured by the vertical tower elements which represent the hills and trees of the surrounding ridgeline.

Locally sourced sandstone and timber will be used in construction to complement the site’s proximity to the water. Street walls will be retained along Baker Street and Dane Drive but will be activated at ground level to draw people towards Leagues Club field and the waterfront.

Two levels above the podium will be set back, allowing for reduced bulk and scale of the development and reducing overshadowing to public spaces.

The east-west through site link will be located midway along the large civic block site, connecting Baker Street to Dane Drive and aligning with the main entry of Central Coast Stadium. The documents propose that the southern end of Dane Drive between the stadium and the Leagues Club be pedestrianized and closed to traffic during games and other events, achieving pedestrian flow and better connectivity.