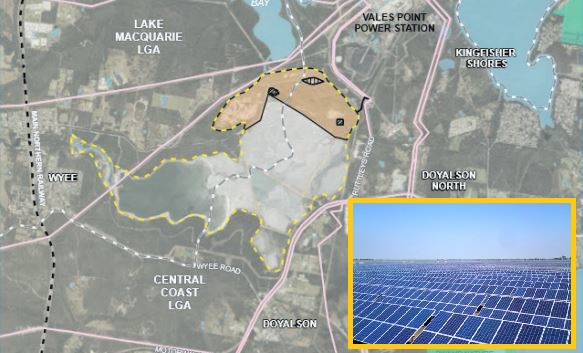 The brown shaded area is the solar farm area within the ash dam boundary depicted by the yellow broken line (including Mannering Lake in the bottom left of the boundary). Electricity transmission lines are shown in pink. Inset ; A typical Solar array structure (illustration purposes only)

News of a power partnership in a $75M solar project on Delta Electricity’s coal ash dam, comes only two weeks after the announcement of a Parliamentary Inquiry into rehabilitation of ash dams at coal fired power stations.

One of the Inquiry’s criteria is to investigate site remediation and re-purposing of the land, and this Delta Electricity solar project is a good example of repurposing, according to the NSW Department of Environment and Planning.

Coal ash from the Vales Point Power Station has been dumped in a huge dam area off Ruttleys Rd since the power station opened in the 1960s.

Over the years the ash dam has been capped with soil and other landfill as well as replanting with native grasses.

The solar field will be on about 80ha of the rehabilitated portion of the 524ha ash dam, within the 1,730ha Vales Point power station landholding.

Community feedback about the project has been generally positive as a good use of the rehabilitated areas of the ash dam.

An evaluation report by NSW Department of Planning and Environment said even though some environmental impacts were identified, such as temporary traffic inconvenience, ecological impacts, construction noise and vibration, they had been avoided or minimised, wherever possible, through design and mitigation measures.

The report said the beneficial effects of renewable energy generation, on land unsuitable for any other development, was considered to outweigh the mostly temporary adverse impacts and risks associated with the project.

No significant impact is likely to ecological communities, migratory species and, particularly, threatened species, and even though wading birds use the saltmarsh, it was not considered a “critical” habitat, the report said.

Safety improvements and road upgrades will take place at the access off Ruttleys Rd, Mannering Park, with dedicated turning lanes from both directions into the property.

Construction will start in the second quarter of 2020 and be operational by the end of the year.

Independent power producer and investment company, Enernet Global, and Delta Electricity, have signed a power purchase agreement for the sale of 87GWh of energy from the 62MW solar farm. Enernet will finance and construct the solar farm and sell the power to Delta, who will distribute it through the national electricity grid.

Delta will also use power from the solar farm in its retail business, ensuring a significant contribution to state and federal government renewable energy targets. This innovative project will pioneer in Australia a fully ballasted system to anchor the solar panels, where traditional driven or screw piles are not possible, such as the rehabilitated ash dam surface.

Delta Electricity CEO, Greg Everett, said other advantages for establishing a solar farm at Vales Point was the proximity to an existing grid connection and already being in the land-use zone for power generation. “The partnership with Enernet recognises that both dispatchable power and low emission technologies have a role to play in supporting an affordable, reliable and sustainable national electricity grid, ” he said.

“Vales Point (power station) is an example of how both technologies can be co-located and integrated into the grid, ” Everett said.

Vales Point solar farm will have an estimated life of 30 years when it would either be rejuvenated or decommissioned. Solar projects are highly reversible after decommissioning , with all above-ground infrastructure able to be removed.

Over the next 18 years, Vales Point will be one of four NSW coal-fired power stations to close, and this transition to solar energy will add to NSW’s five major renewable power projects, one of which is the largest solar farm in Australia. Enernet Global President, Paul Matthews, said Vales Point solar farm would pave the way for his company to deliver similar plants in other challenging sites across Australia, including other ash dam sites, mining tailings dams and landfill sites.

Vales Point solar farm will have an estimated life of 30 years when it would either be rejuvenated or decommissioned. Solar projects are highly reversible after decommissioning , with all above-ground infrastructure able to be removed.