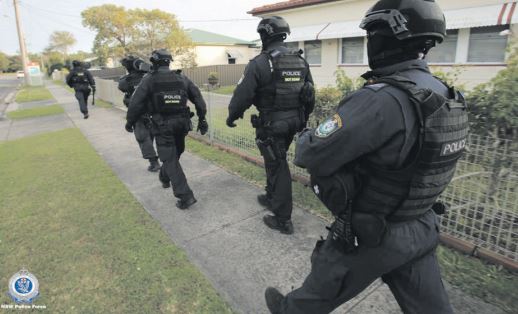 A 56-year-old Springfield man was among the nine people arrested and charged with 329 offences during a major police operation to shut down a large scale drug supply network on the Coast.

In March, detectives from Tuggerah Lakes Drug and AntiTheft Unit established Strike Force Lamprey to investigate the supply of prohibited drugs on the Central Coast. The investigation focused on the ongoing supply of methylamphetamine (ice), cocaine and cannabis.

Police will also allege that members of the Bandidos and Rebels Outlaw Motorcycle Gangs were directly involved in the ongoing supply. Following extensive inquiries, at about 7am on Thursday, September 5, officers from Tuggerah Lakes Police District, with assistance from officers from Brisbane Water Police District, Strike Force Raptor and the Public Order Riot Squad, executed nine search warrants at properties in The Entrance, Berkeley Vale, Long Jetty, Springfield and Bateau Bay.

During these search warrants, police located and seized ice, cannabis, drug paraphernalia, weapons, ammunition and cash. Nine people all aged between 37 and 56 were consequently arrested. The 56-year-old man was arrested at an address on Cary Cres, Springfield. He was charged with one count of direct criminal group, one count of supply commercial quantity prohibited drug, eight counts of supply prohibited drug and two counts of possess prohibited weapon.

He was refused bail to face Gosford Local Court. Tuggerah Lakes Police District Commander, Superintendent John Gralton, said “the arrests were the culmination of six months of hard work and dedication from detectives. These arrests affectively dismantle a number of largescale drug supply networks on the Central Coast. The drug ice is an insidious drug that ruins peoples lives and destroys families”.

“We aim to disrupt these criminals at all levels and we will be relentless in our pursuit of drug dealers. More arrests will follow”, Supt Gralton said. As a community, we need to work together to dob in a dealer. If you have any information which could assist police, please call Crime Stoppers, Supt Gralton said. Investigations under Strike Force Lamprey are continuing.