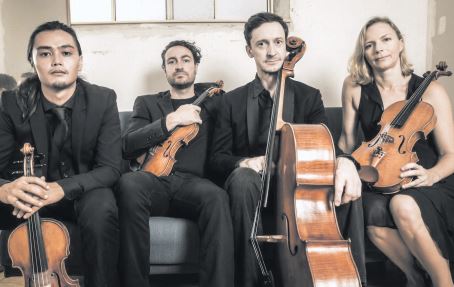 The Phoenix Quartet will play at Green Point Sept 22.

The Phoenix Quartet will present a musical exploration of identity, balance and harmony when their latest concert, Freedom and Equality, comes to Green Point on September 22.

Quartet Artistic Director, Dan Russell, said Freedom and Equality was a strings presentation of the work of cutting edge American composer, Jennifer Higdon, alongside the likes of Masters Haydn, Shostakovich and Tchaikovsky.

This is music from a time when life seemed straightforward, from deceptively simple arrangements to more complex structures that assign parts equal importance.

This is music to release a woman driven by a man to acts of insanity, music that liberates closet homosexuality and unacceptance, and melodies that brought Tolstoy to tears amid depression. What positive can come from this? This is some of the best chamber music ever written, Russell said.

The Phoenix Quartet is a premier string quartet that performs in Sydney, Central Coast and Canberra. It was launched by Charmian Gadd at Crossroads Festival, where they performed Schuberts masterpiece Death and The Maiden, in 2018.

Its members come from the ranks of national and international orchestras such as Opera Australia Orchestra, Canberra Symphony, Sydney Symphony, BBC Philharmonic, Kammer Philharmonie Koln, Boston Symphony and Academy of St Martin in the Fields.