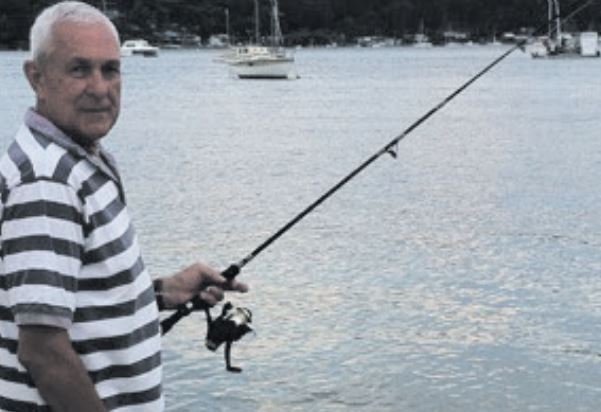 Alf Quinten barefoot and fishing when he first moved to the area Image: Mr Quinlen

It took an accident to his young grandson to get Mr Alf Quinten riled up about the slow response to reports of broken tiles and fibro building material washing up every day on Booker Bay and Ettalong beaches.

Until the young boy cut his foot, Mr Quinten had been quietly picking up the material and piling it up in one spot near his house. But after the accident, he rang council and told them about the building rubble, including what he believed was asbestos.

He says he rang them three times in one week and each time he was advised it would be cleaned up. Last Monday, firefighters from Umina Fire Station and a specialist Hazmat crew from Berkeley Vale turned up. The crews bagged a small amount of fibro material, and left it on Mr Quintens front lawn for council to collect.

Mr Quinten said a council staff member rang him on Wednesday to say the council would pick up the bag and it did disappear on Thursday morning. Also on Wednesday, an employee from the Crown Lands Department, Mr Martin Dawson, inspected the beaches and spoke to a couple of residents. Mr Quinlen said that Mr Dawson said to him that something had to be done about this, that this is not good. Meanwhile the building rubble continues to wash up on the beach. A council staff member sent Mr Quinlen a response to a letter sent to Cr Chris Holstein on August 18.

Coastal protection section manager Mr Ben Fullager said council was aware that rocks and debris had become uncovered exposing a rock revetment wall which had been covered in sand as part of an upgrade by the former Gosford council. He said rocks would continue to be exposed as the beach eroded, a phase it was in at the moment that was part of the natural cycle that resulted from a range of environmental factors. Weekly inspections of Ettalong Beach are carried out and any asbestos material found is removed, bagged and taken to local land fill, Mr Fullagar said. However, the area around the ferry wharf has a heritage order over it, prohibiting any work at this location.

Mr Fullager said more than 550 ton of rocks and rubble had been removed during the past two years and taken to land fill only to find that after the next large swell more rocks had become uncovered and the beach was back in the same state as before they had removed any rocks. Removal of the rocks is not a financially viable solution. The rocks are scattered down through the sand profile, not just on the surface so it is not a simple exercise to scrape them off the top, Mr Fullagar wrote.

Leaving the rocks in place will in fact help to slow the erosion currently taking place. Upon advice from a coastal engineer, rock and rubble were removed from exposed areas and buried at the toe of the revetment wall. These works have been carried out on five occasions, the latest occurring on July 10 and 11. Council currently has a study underway to consider erosion processes in the Ocean Beach and Ettalong areas.

The outcomes of this study will enable council to better identify effective measures than can be utilised to mitigate further erosion.