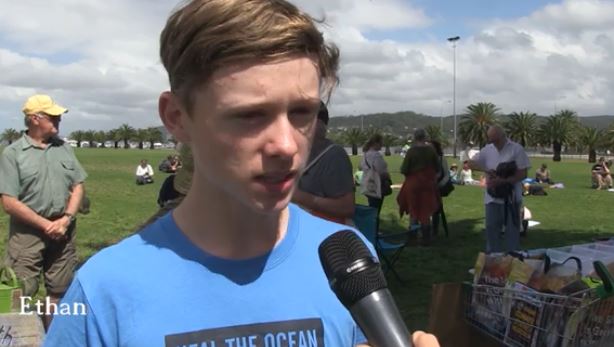 Ethan Hill of Umina was a co-organiser of the Gosford event.

The Central Coast this week played its role in the Global Climate Change Strike. Close to 1,000 people rallied on Gosford’s Leagues Club Field and other locations to call on government and business to take real action to transition to a low carbon economy.

Across Australia, it is estimated over 300,000 people participated in the climate strike which was inspired by Swedish schoolgirl Greta Thunberg and is a precursor to the United Nations Climate Action Summit in New York this coming week.

A key feature of the climate strike was the lead role taken by school children in co-ordinating the rallies.

High school student Ethan Hill said “young people have three demands: no new coal projects, including the Adani mine; 100 per cent renewable energy by 2030; and a just transition for workers currently employed in fossil fuel industries”. [Link to video interview]

Many of the younger people expressed frustration with older generations and politicians. One of the student co-ordinators, Ella, said, “Older generations are in an echo chamber of their own views created by the current government and its important for them to step out of that for a moment and listen to my view”.

Several parents and teachers expressed concern that the climate threat was causing fear and anxiety among school-age children, especially younger children. “Some likened it to the shadow of nuclear warfare which reached a flashpoint in the early 1980s. Its a great opportunity for the children to express just how scared they are”, said local teacher Tracy

Gosford MP Liesl Tesch joined the crowd on the Leagues Club Field and said it was important for government to listen to the voice of the community. “As a former teacher, it’s great to feel the energy rising and give a voice to the students.” [Link to video interview]

Momentum appears to be building across the Central Coast for more substantive action to address climate change.

Earlier this month, the Central Coast Council was the 32nd Council in Australia to declare a climate emergency and is exploring ways to reduce its own carbon footprint. Despite its fierce opposition to the new Wallarah 2 coal mine however, the Korean mine owners were granted approval by the State Government in July to move forward.

“No one else is going to stop it, so we have to”, said 11 year old Benjamin Barry.