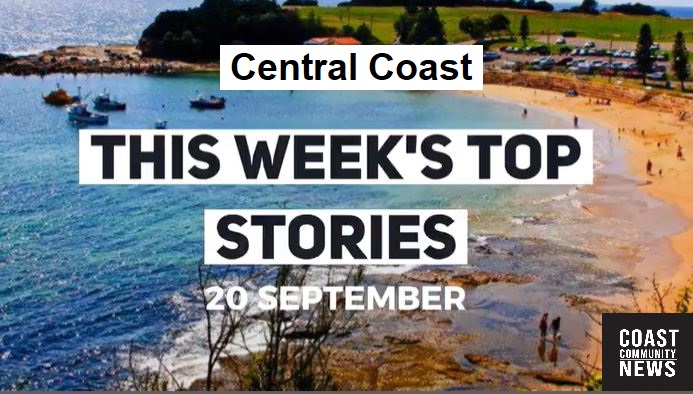 Climate march A large cross-section of the Central Coast Community, young and old alike, joined others all around the world in today’s global climate change strike on Gosford’s leagues club field. The strike, inspired by Swedish schoolgirl Greta Thunberg, is designed to push policy makers for more action on climate change ahead of an emergency United Nations climate action summit in New York next week.

Thousands of people attended climate strikes across the Central Coast, many of which have been organized by school students, including Gosford schoolboy, Ethan Hill.

Mayoral Elections : A special council meeting will be held this Monday to vote for the roles of Mayor and Deputy Mayor. It is understood that current Mayor Jane Smith and deputy Chris Holstein will re- contest their positions, but it is believed others are working the numbers in what looms as a major showdown in the chamber.

There has been some suggestion that Liberal and Labour backed Councillors may actually unite in support of one of their own, possibly Lisa Matthews or Chris Bourke to break the hold of the current Mayor. Ross Barry spoke this week to Deputy Mayor Chris Holstein.

The full interview with Councillor Holstein is now available on our website.

CC Mariners into Semi Finals: The semi-finals of the FFA Cup are coming to the Central Coast. On Tuesday night, the Mariners defeated Hume City to advance to the semi-final where they will meet Adelaide United at Central Coast Stadium on the 2nd of October. A goal by Abraham Majok in the 92nd minute of the match saw the Central Coast Mariners prevail in a torrid match in which they were kept scoreless until deep into stoppage time. And Hume City could face action from FFA after supporters hurled bottles at Mariners players at the end of the game.

Wyong Hospital Redevelopment A major redevelopment of Wyong Public Hospital has been approved by the State Government. The $145 million revamp is being undertaken in anticipation of increasing growth in demand for public health services in the Wyong region and to replace outdated facilities. The new building will include, among other things, a new emergency department, medical imaging and psychiatric emergency. The construction of the building is expected to start this month and be completed in early 2022.

Davistown wetland property sale: The iconic Davistown salt-marsh wetlands are set to be sold in coming months. The prospective sale comes after years of controversy and attempts by Council to return the 19 hectares of wetlands to public ownership. The site is zoned conservation but is said to be earmarked for Coastal Open Spaces designation. We spoke with sales agent, Larry Altavilla.

Jemma Smith World Champion: Uminas Jemma Smith has taken out the gold in the Womens Under-23 Canoe Ocean Racing World Championships in France. Jemma came off a strong performance at the Canoe Sprint World Championships to land the gold and finished fourth overall in a field that contained Olympians and world champions. Smith will be one of 20 women competing in the upcoming Coolangatta Gold ironwoman series in October.

The Terrigal Trojans have taken out the 2019 Central Coast Rugby Union premier 1 Grand Final with an emphatic 76 points to 21 over Gosford at Woy Woy Oval. Gosford led 7-3 early in the match but the Trojans then steamrolled the Red Devils for the rest of the match. Jayden Woolley, who crossed for two tries and kicked 10 goals from 12 attempts, was named man of the match.

Separately, Central Coast Rugby has been advised it was unsuccessful in their bid to host a Waratahs match in 2020. The Waratahs will play matches at Newcastle Wollongong and one country town but not the Central Coast.

SportsFest Cancelled: A reminder that after all the rain in recent days, the long-awaited SportsFest has been cancelled this weekend. The event will not be re-scheduled and, instead, Central Coast Council will engage with individual sporting clubs on future activities to promote health and fitness.

Art Prize: unveiling of the winners of the 2019 Gosford Art Prize. Taking out the top prize this year was Patongas Jocelyn Maughan with her work Ken in Grisaille. One of the highlights for 2019 was the inclusion for the first time of an Aboriginal Art Award, sponsored by Safework NSW. The inaugural winner was Joshua Muir with his work DATO a digital print on aluminium. A selection of entries will be exhibited at Gosford Regional Gallery until November 3, with the public encouraged to vote for their favourite in the Peoples Choice Award. Thanks for watching.

We look forward to seeing next week for Friday 5@5