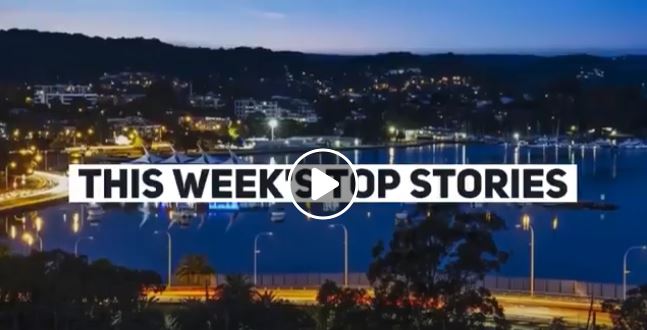 Detectives from Tuggerah Lakes Police District have dismantled a large-scale drug supply network on the Central Coast. Strike Force Lamprey led to the arrest of nine people aged 37 to 56 charged with over 320 offences Police allege that the Bandidos and Rebels outlaw motorcycle gangs were directly involved in the whats been called an ice empire on the Coast. Tuggerah Lakes Police District Commander, Superintendent John Gralton, said the arrests were the culmination of six-months of hard work by detectives.

This week saw another tense Council debate over the potential hand-back of $4.6 million dollars earmarked by Infrastructure NSW for the Winney Bay Clifftop Walk Councillors rejected the Plan A proposal which had been endorsed by Infrastructure NSW and the Darkinjung Land Council and instead voted to seek more community consultation around two alternative proposals, known as Plan B and Plan C, both of which have less environmental impact. The Infrastructure NSW funding offer is said to expire on September 18.

Separately, the Council agreed to seek expressions of interest to design a Giant Pelican statue at The Entrance. The motion, brought by Cr McLachlan, called for a world record breaking piece of art to celebrate pelican feeding at The Entrance and drive growth in tourism. This is what some of the locals had to say about the project.

The Regional Planning Panel has approved a $32M redevelopment of Gosford RSL Club. The plan will see the new clubhouse built on the current carpark adjacent Central Coast Hwy. The new club house will three stories and roughly 50 per cent larger than the current building, but on a smaller footprint. Ross Barry spoke with RSL CEO Russell Cooper.

The results of the NSW Governments 2019 My Community Project are in, with several projects across the Coast to be funded. Successful projects included, among others, a boatshed for Norah Head Marine Rescue Base, an expansion of the mountain bike trail in the Ourimbah State Forest and a social enterprise cafe to train at risk youth in Tumbi Umbi. Copacabana will get a Mens Shed while Woy Woy will receive funding to rebuild the Peninsula Community Garden. Another successful project was the proposal to upgrade The Avoca Beach Picture Theatre and we spoke this week with theatre owner Beth Hunter.

In rugby, reigning premiers the Ourimbah Razorbacks have bowed out of the premiership race after losing the elimination semi-final to the Gosford Red Devils.

We close this week with an excerpt from our exclusive interview with Dr Steven Stanke, Director of Music for the Royal Australian Navy and also the Artistic Director of Symphony Central Coast. Dr Stanke has had an illustrious career and has now brought his expertise to assemble a world-class orchestra right here on the Central Coast.

The full interview with Dr Stanke will be available on the coast community news website shortly.

Thanks for watching 5@5. Im Georgie Lienemann and we look forward to seeing you next week.