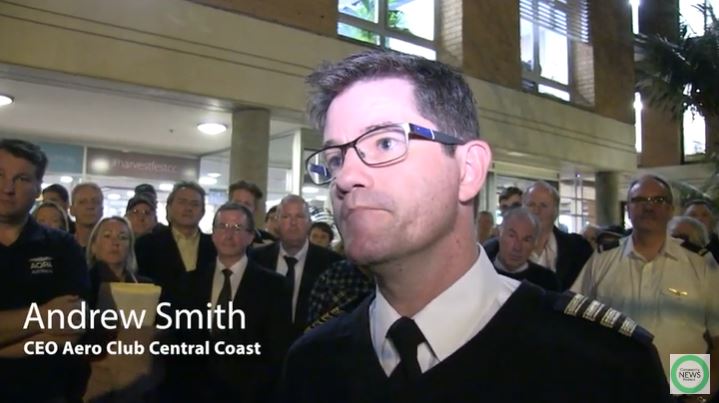 Andrew Smith, CEO Central Coast Airport out the front of the Council Chambers

Last week we foreshadowed a fiery council meeting and that’s exactly what we got. On Monday evening, the battle for Warnervale airport took an unprecedented turn when 200 citizens converged on the Councils chamber to hear the debate. 100 People filled the public gallery and a separate overflow room had to be set up to accommodate the rest.

The motions at the centre of a fiery debate were about encroaching vegetation, pilot safety and the future operations of the airport itself. At one point, Mayor Jane Smith adjourned the meeting and walked out when all 100 people in the gallery stood in silent protest after the council dismissed a motion that would’ve allowed trimming of vegetation in proximity of the runway. Central Coast Newspapers were at the meeting to cover developments as they unfolded.

The revitalisation of Gosford CBD is poised to continue with St Hilliers announcing that the Masterplan for Central Coast Quarter will be lodged in September. The development will include a hotel, apartments and retail outlets with multiple public thoroughfares. The precinct, if approved, will transform the southern end of Mann St, near the ATO and finance buildings. NSW Planning Minister Rob Stokes visited the Coast yesterday to unveil the latest plans to rejuvenate the Leagues Club Field in Gosford. Planning has been done in consultation with the Darkinjung people.

The redevelopment of the Field will incorporate walkways, a running water course and will reflect both its indigenous and colonial heritage. Minister Stokes said that work would commence before the end of this year. In related news, Minister Stokes also announced a historic agreement with the Darkinjung Land Council to enable rezoning of land in Somersby. The plan will see the majority of the land zoned environmental, with a smaller portion to allow rural residential subdivision.

Erina Fair Ice Arena is set to close this month for building works, mainly on its external cladding. Lendlease announced that the rink would close on August 18th for up to a year, as it needs modification to meet updated legislative standards, since it was constructed in 2004. T

he move leaves figure ice skating, ice hockey and learn to skate groups, plus many schools with no choice but to travel out of the Central Coast to skate. LendLease Managing Director of Funds Management, Scott Mosely said the work could not be avoided and apologised to users. Last skate is happening this Sunday from 12pm.

Our weekly video news about the top Central Coast stories of the week that was and the weekend to come.

Subscribe to our YouTube channel for instant weekly updates here and to find the archive of dozens of interviews and local stories.