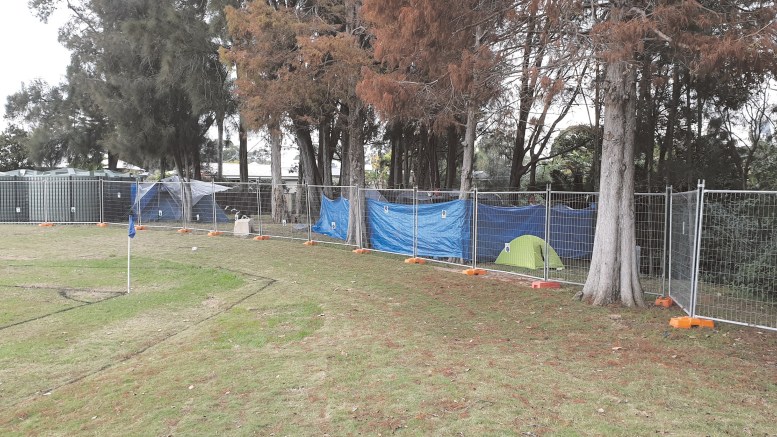 Homeless locals have been living on the grounds of Austin Butler Oval at Woy Woy.

A group of homeless people that had been living on the grounds of Austin Butler Oval at Woy Woy were made to leave the site on July 8 by Central Coast Council rangers and Brisbane Water Police.

It is understood they were offered emergency accommodation. The group had formed a steadily growing tent community on the site since January. During this time, the ovals primary users Woy Woy Football Club, had been negotiating with Council to have them removed. According to Club Committee member Mr Matt Brien, the groups presence had created a health and safety issue for users of the oval. He said the club had lost significant numbers of junior members as a result. It is disgraceful that Council allowed this to go on for seven months, Mr Brien said.

This would never be allowed to happen at The Haven Oval in Terrigal or Adcock Park but because this is Woy Woy Council just turned a blind eye, Mr Brien said. Mr Brien said the Committee was thankful that action had finally been taken but expressed his disappointment that it took threats of going to the media to seemingly spark Council into action. Our membership is shot, our reputations tarnished and we dont know what our junior numbers will be like next year, so we definitely haven’t ruled out asking for changes to our lease or for a reduction in the cost owing on our new club facilities, Mr Brien said.

We want assurance from Council that something like this will never be allowed to happen again, he said. We want Council to take responsibility for their part in this mess and we want them to be accountable. They went into this not wanting to be the bad guy. They didn’t want to be seen as the Council kicking out the homeless, but the bottom line is this just wasnt safe and had something happened the blood would have been on Councils hands, Mr Brien said. Mr Brien said during the seven months the group was at the oval the Committee had approached Member for Robertson Ms Lucy Wicks, Member for Gosford Ms Liesl Tesch and Cr Chris Holstein for assistance. Only Ms Wicks responded to Peninsula News request for comment but it is understood that Ms Tesch and Cr Holstein are on leave.

She confirmed she had been approached by the Committee regarding the group but said in both instances the committee was informed that this was a matter for Council. Ms Wicks said she did raise the issue with Council staff and advocate on behalf of the community. Ms Wicks said the issue of homelessness on the Central Coast was very serious and that she was committed to continuing to work to achieve positive outcomes for the community. The issue of homelessness is an important and complex one, particularly here on the Central Coast.

Housing and access to safe accommodation is fundamental to the welfare of all Australians. While the delivery of services falls under the NSW Governments responsibility this really is an issue that all levels of government need to work together on, alongside the community and I am committed to continuing to do so, Ms Wicks said. Coast Shelter chief executive Ms Rachel Willis confirmed the complexity of the situation. Ms Willis said Coast Shelter was aware of the individuals at the oval and said that staff from the organisations Coimba Mens Refuge had visited them with Council Rangers on two occasions to provide information about relevant services prior to their expulsion from the site.

Ms Willis said Coast Shelter has assisted rough sleepers and will continue to help them where possible, but assertive outreach like this was not something Coast Shelter were funded to provide. Providing interventions to rough sleepers is an extremely complex task. Coast Shelter provides assistance where possible, however successful outcomes depend on the coordinated effort from various services and departments who can provide intensive wrap around supports, Ms Willis said. Council was also approached for comment.