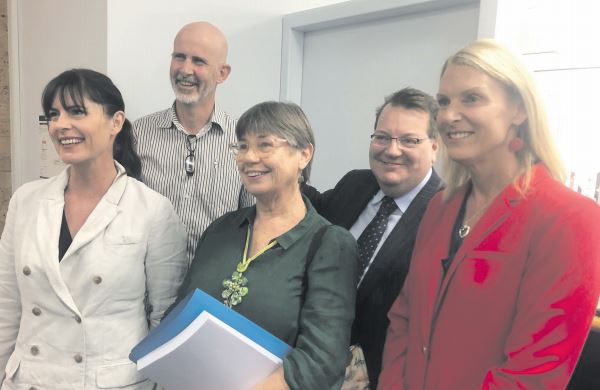 Five of the eight candidates for Robertson at the ballot draw on April 24. From left: Lucy Wicks, David Abrahams, Cath Connor, Robert Marks and Anne Charlton. Archive May 2019.

The ballot order has been decided for the seat of Robertson, with Member for Robertson, Lucy Wicks, saying the May 18 Federal Election will be the most important choice voters on the Coast will make in a generation.

Only a handful of people, including five of the eight candidates standing for the seat, turned up to witness one of the steps of democracy in action, as the ballot was drawn on April 24 at the Australian Electoral Commission office in Gosford.

The process was repeated across the country in each electorate with the same script being followed and starting at exactly noon. Eight wooden balls were put into a wire cage and the handle was turned. A second Australian Electoral officer sat behind the cage, with a black mask over her face. She pulled the numbers out of the cage and handed them to a third employee who declared the numbers.

The first name out of the barrel was, Judy Singer, from Sustainable Australia, who won the coveted first place on the ballot paper, commonly believed to favour the so-called donkey vote.

Taking second place on the ballot paper will be, Robert Marks, of the United Australia Party, followed at number three by, Fiona Stucken, of the Christian Democratic Party, Fred Nile Group.

Independent, David Abrahams, name came out of the barrel fourth. I cant complain four is my lucky number, Abrahams said. Seriously, I have been very impressed with the process of the ballot draw.

Sitting Member, Lucy Wicks, of the Liberal Party of Australia, said placement on the ballot paper wasn’t all-important. Whats really important is that people know who they are voting for and why, Wicks said.

Cath Connor, of The Greens, took sixth place on the ballot. Its nice to have the official part of proceedings done we are now off and running, she said.

Sean Bremner Young, of the Animal Justice Party, took seventh spot on the ballot, followed by the ALP candidate, Anne Charlton, at eighth.

In summary, your ballot paper for the seat of Robertson in the May 18 Federal Election, House of Representatives, will read: