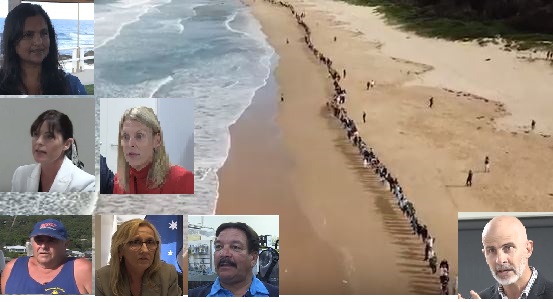 The Australian Electoral Commission estimates that, by Saturday, as many as 40 per cent or more of all Coasties will have already voted in the Federal Election.

Coast Community News spent time over recent weeks speaking with candidates for the Seat of Robertson as well as community groups and voters queuing at pre-poll booths. Here’s a summary of what everyone had to say.

The most important issue to people in the seat of Robertson appears to be climate change and concerns over the PEP11 gas exploration permit.

The major parties have struggled to explain their position on this issue. Liberal MP, Lucy Wicks, said she had no knowledge of any upcoming 3D seismic testing, notwithstanding a statement from Advent Energy in recent weeks that a proposal was imminent. She said any approval was a matter for the Perth-based regulator NOPSEMA, not Parliament.

Labor candidate, Anne Charlton, said that if elected, Labor would undertake a review of all offshore exploration.

Independent candidate David Abrahams, who first brought the local community’s attention to PEP11, says such statements were not good enough and that the Parliament could and should revoke PEP11 now, before its too late. Working closely with Save our Coast, Abrahams and Greens senator Mehreen Faruqi led a rally of 2,000 people on Umina Beach last week to send this message to Canberra.

Among older people, the prospect of losing franking credits under a Labor government is causing angst. Most were confused by how and who it would impact. Even some older Labor voters had decided to give their vote to an Independent or a minor party to prevent cuts to their retirement incomes.

The Liberal-National Party coalition oppose the changes to franking credits and Independent David Abrahams said if he helped form a minority government he would insist on a review of the impact on retirees. For younger people, youth unemployment and training loomed large as priorities. Many were disillusioned with big-party politics.

David Abrahams, the founder of Youth Connections on the Central Coast, said the key to employment and training was to partner with industry to leverage new digital technologies and to invest heavily into smart city infrastructure.

On other issues, Labor candidate Anne Charlton said the ALP was committed to restoring health funding.

Robert Marks (UAP) spoke of making large foreign companies pay their fair share of tax and pointed to prior Liberal and Labor policies that created the loopholes that allow them to avoid paying tax in Australia.

David Abrahams was greeted with applause at the Koolewong-Point Clare-Tascott Mingle with the Candidates forum for his vision to de-corporatise aged care and strengthen community-based services.

National polls suggest there is a significant swing away from the LNP coalition but in the Central Coast, we may be seeing a swing away from both major parties. We will know soon enough.

All our interviews with available candidates are available at: www.coastcommunitynews. com. au/elections