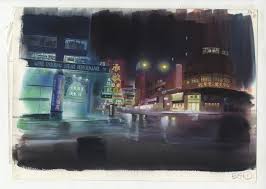 A new exhibition offering a behind the scenes glimpse into the making of some of Japans most influential animated science fiction films is coming to Gosford Regional Gallery in March.

The exhibition, entitled Anime Architecture, impressed audiences in London and Berlin. Gosford Regional Gallery and The Japan Foundation, Sydney, will be the only two venues in Australia to showcase the exhibition. Council Team Leader, Art Galleries, Arts and Culture, Tim Braham, said because studios only look at the final product as the crucial work, the creative process that goes on behindthe-scenes is something rarely seen to audiences outside the studio. Anime Architecture is an amazing exhibition that reveals some of the intricate creative processes behind Japans most influential animated science fiction films.

The works of well-known Japanese animators, Hiromasa Ogura, Takashi Watabe, Haruhiko Higami, Mamoru Oshii and Atsushi Takeuchi, who worked during the peak of hand-drawn animation, also feature in the exhibition. It is truly exciting that we have been able to secure this very different exhibition for the community, which offers an insight into the fascinating process before digital animation became mainstream, Braham said.

Anime Architecture will run at Gosford Regional Gallery from March 30 until May 19, and is presented in association with Les Jardins des Pilotes. Iconic Japanese animated films featured in the exhibition include: Patlabor: the Movie; Osamu Tezukas Metropolis; Ghost in the Shell; and, Ghost in the Shell 2: Innocence. Council Mayor, Jane Smith, said the exhibition was a coup for the Coast and would be a highlight of the diverse program of local, national and international exhibitions offered by the Gallery this year.

Our exhibitions are supported by a strong education and learning program including tours, artist talks, practical workshops, demonstrations and classes for both children and adults, fostering creative arts on the Central Coast. We invite locals and visitors to the area to drop into the Gallery and check out this very different and interesting international exhibition, brought to our very own doorstep by Gosford Regional Gallery.

Cultural Heart gathering on the waterfront