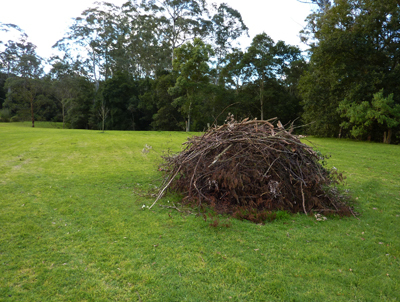 Open pile burning guidelines to be put out on exhibition

The policy which has been on exhibition will, according to Asquith, “impact the health of many people with asthma, as it allows burning without a permit, and increases the amount of fuel by 270 per cent. The existing Rural Fire Service and NSW Fire Policy on Pile Burning does all that is needed for keeping properties clear of fuel around buildings, according to Asquith.
“I have been involved in bush fire risk management, including 12 years on the Wyong Bush Fire Risk Management Committee (1988 to 2000), four years on the NSW Bushfire Coordinating Committee (1996 to 2000) including two years as Chairman of the State Standing Committee on Bush Fire Risk Management. “From 1994 to 2000, I was the Coordinator of the Nature Conservation Council of NSW (NCC) Bush Fire Program. “My activities with NCC included co-authoring a Manual on Bush Fire Risk Management, and conducting 26 Bush Fire Workshops throughout NSW. “In areas within the Sydney Air Shed, from the Hunter to Illawarra via the Central Coast, Pile Burning should not be allowed, as nearly 5 million people (roughly 450,000 of whom have asthma) are impacted by what is discretionary burning,” Asquith said.
“I am writing to the Asthma Foundation on the issue. as they have previously raised the issue with the NSW Government,” he said. “The NSW Rural Fire Service has an existing Pile Burning Standard which notes: ‘If the pile burn could be of danger to a building at any time of the year, or the burn is during the Bush Fire Danger Period, you must have a Fire Permit issued by the RFS or Fire and Rescue NSW. “’This standard provides advice regarding the construction of vegetation piles in order to allow safe and efficient burning. “The Central Coast Council has been lobbied by locals to implement a Central Coast Council draft Pile Burning policy which is a massive expansion of the scale of burning,” Asquith said. The draft policy, for example, increases the size (diameter) of logs allowed to be burned from 150mm to 300mm. The draft proposes increasing the bulk of Open Pile Burns, from 1.5m by 2m, to 2m by 4m. “It also seeks to remove the need for a permit, and instead allow for self-assessment and burns at any time,” he said.
The current draft allows self-assessment for: D1parcels of land greater than 4,000 square metres in area; RE2 Private Recreation; R5 Large Lot Residential; RU1 Primary Production; RU2 Rural Landscape; RU5 Village, or RU6 Transition under the Local Environment Plan. “A permit is required when burning on Environmentally Zoned land, but there is huge pressure on councillors for this to be dropped,” he said. “RFS tell me there are three major considerations and each comes under different legislation. “Safety and Controlling Wildfire is the responsibility of the RFS and the Bushfires Act; “Smoke is the regulatory responsibility of the EPA and Council.
“The person who lights the fire, with or without a permit, is responsible for any deleterious effects on neighbours. “Environment (vegetation) is the responsibility of the Council and clearing or burning needs their approval. “However, in my opinion, RFS are missing a significant aspect, being the impact of pollution on public health. “As this policy covers the discretionary burning of a heap of dry vegetation at any time, except during days of total fire bans, it is not emergency or a critical part of the fire risk management strategy. “The fuel could just as easily be disposed of by other means which do not generate smoke, such as mulching or dumping at a waste facility.
“There are many areas on the Central Coast where blocks of rural residential of 4,000-plus square metres could be burnt regularly. “In the immediate area surrounding Glenning Valley, (Ourimbah, Berkeley Vale) there are nearly 14,000 people who are likely to be adversely impacted by smoke. “Hence, the policy should not apply near urban areas. “A map is needed. “Where burning may be conducted without a Permit, there is nothing to stop people burning each time a pile of leaves can be raked up, this could be almost continually. “One in nine Australians suffer from asthma and wood smoke is a source which is almost impossible to avoid.
Source: Media release, Dec 4 John Asquith, Community Environment Network