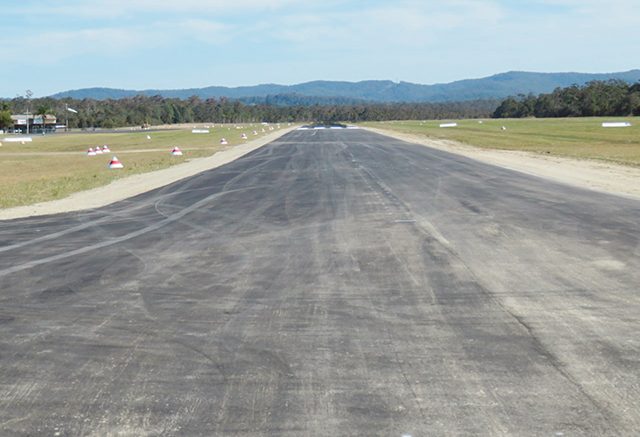 The runway at Central Coast airport

Central Coast Aero Club Board Member, James Stewart, has argued that the Warnervale Airport Restrictions Act 1996, was never intended to curtail the use of small aircraft, but specifically to stop 24-hour operation of jet aircraft.

“At its meeting on November 12, Central Coast Council voted to seek legal advice as to whether the Warnervale Airport (Restrictions) Act 1996 was being breached,” Stewart said. “The motion was only just carried, with the mayor using her casting vote,” he said. “The thrust of the enquiry is clearly whether the Act has been triggered, and if so, whether the number of movements, being a take-off or a landing, has exceeded the maximum daily maximum permitted under the Act. “A little research by those championing the need for advice, or the stalwart small, disaffected, indefatigable opponents of the airport, would indicate that the enquiry rests on a misconception.

“Those who say that the Act was intended to apply to the type of aircraft which, because of its length, the airfield is limited to accommodate, conveniently ignore the circumstances under which the Act was passed. “If the notion that the Act limits the movements of small aircraft during the day is correct, the Act is the only such Act in Australia. “To understand the circumstances in which the Act was passed, it is necessary to revisit the facts giving rise to the understandable fear which residents had at the time that it was passed.

“In 1996, the airport had been operating for over 20 years with movements confined to the same type of light aircraft which had always operated, and still operate, there. “An examination of the record of the parliamentary debates in the second reading speech in Hansard, describes the situation which the Act was passed to avoid. “Elizabeth Kirby referred to a plan for an Asian university campus for 7,500 students, which ‘would require 351,000 movements per year or 1,000 per day’.

“This is reaching into the realms of fantasy; it does not take into account all measures necessary for planning an enormous airport development. “The reference to 351,000 movements per year was also referred to by the, Hon I Cohen. “The Hon RS Jones referred to ‘737 jets operating 24 hours a day’. “The Hon MJ Gallagher, after quoting an article in Australian Aviation magazine which stated that Wyong Council had grand plans for turning Warnervale into a freight centre capable of carrying 747s, said ‘Can Honourable members honestly imagine what it would be like to be woken at 2am or 3am as a large aircraft flies overhead?’

“The parliamentary debate followed public meetings, one of which took place at Wyong High School, in December, 1995. “Gallagher described that meeting: ‘I have been told by a number of people who attended a public meeting at Wyong High School, in December, 1995, that, Mr Dawson, the town clerk of Wyong Shire Council, told them that it was no use trying to fight the development; that the matter was closed. “’It was simply too late and that bulldozing would start within a matter of weeks.

“He continued: ‘If the concerns of the residents’ action groups are correct, why would a Labor-held council that promotes itself as the one that looks after battlers, allow 737s and Airbus aircraft over their homes around the clock?’ “Clearly action needed to be taken urgently to prevent a perceived intolerable situation where residents would be subject to unchecked 24 hour per day operations from the airport by heavy jet aircraft. “As, Elizabeth Kirby, said, Wyong Council had already voted on July 26, 1995, by eight to two, to suspend the curfew at the airport to allow 24 hour-per-day operations.

“The intent of the Act was clear: it was to prevent unlimited 24 hour-per–day operations by jet aircraft. “Yet those who oppose the airport contend the Act was passed to limit all movements. “That the operation of light aircraft was not specifically referred to in the Act is understandable against the background of the urgency with which the Bill was drafted and debated.

“The Hon BH Vaughan mirrored the concerns of other members when he said: ‘The Government has acted too quickly to avoid a great wrong’. “He added shortly after: ‘But where the stakes are high, one cannot denounce the rushing of legislation. “’This legislation is perhaps being rushed, but it is in the interests of the people who come here today to listen in this Chamber to the House dealing with the matter’. “No speaker complained of the then existing operations at the airport, operations which had been taking place for about two decades. “All debate was addressed to the threatened frequency of large jets. “How, then, can it be said that the intent of the Act was to include light aircraft?

“The purpose of the Act was to address and prevent movement of heavy jet aircraft day and night. “It is common knowledge that the opponents of the airport are largely residents who live nearby; those who probably moved there long after the airport commenced operations and who now complain about the noise of operations which are not significantly different to when they took up residence. “They are self-interested and none has made a case why a completely unremarkable local airport, typical of the many throughout the country, should be other than an asset to the community.

“Airports such as Bankstown and secondary airports in many places in Australia operate in harmonious co-existence with residents. “Those airports have infinitely more movements than Warnervale. “Is Council in favour of the airport or does it take a position at variance with 84 percent of ratepayers who, when a poll was taken at the time of the former Wyong Council, were somewhat in favour of the airport?”