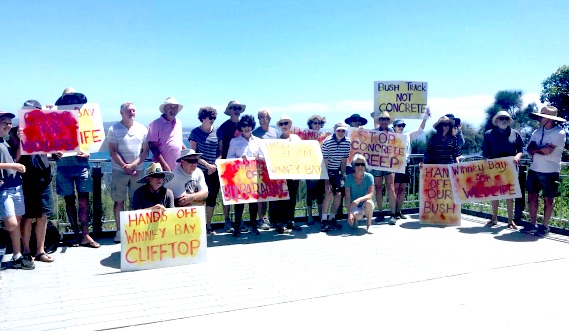 Protesters demonstrate their displeasure with plans for Winney Bay

Labor candidate for Terrigal, and Central Coast Council Gosford East Ward Councillor, Jeff Sundstrom, has argued that revised plans for stage two of works at Winney Bay are “on track”, despite an “outburst” from Member for Terrigal, Adam Crouch.

Crouch had announced that a decision made by Councillors on December 10 to make changes to the Winney Bay Clifftop Walk project would risk the funding awarded to the project by the NSW Government. “Given the significant design changes, this decision will likely force $4.6M from the Regional Growth Environment and Tourism Fund to be handed back to the NSW Government,” Crouch said. “

At a time when the Central Coast should be reaping rewards from record funding opportunities thanks to the NSW Government’s strong Budget management, the Labor-Independent alliance are prepared to put this all at risk in an act of petty politics,” he said. “Such an act could be humiliating for our region.” However, Sundstrom said it was an overreaction from the sitting MP.

“The Member for Terrigal should be listening to the voice of the community and not calling in to local radio and fear mongering about withholding funding,” Sundstrom said. “Government is about bringing together conflicting goals and getting outcomes for your community. “I’m glad that we are progressing with doing that and I invite the Member for Terrigal to join us at the grownups’ table. “On Monday, December 10, Councillors received a report on the community consultation following the re-exhibition of the plans for Stage 2 of the Winney Bay Clifftop Walk,” Clr Sundstrom said.

“Whilst it was clear that there was negligible opposition to the walk being constructed, it was also clear that there was a desire on the part of locals to have the project scaled back to something which better reflected and respected the amenity of the area,” he said. “The feedback Council received was 236 supporting the concept as exhibited, 210 that oppose, and a petition with over 650 signatures also opposing, showing that there was a lot of contention locally over the plan. “Consultation and debate over the past months has brought about a commitment to a more environmentally sensitive concept that will achieve all the desirable outcomes. “A statement from the Member for Terrigal said that inclusive access has been removed, but this is not the case. “Despite threats that funding could be withdrawn, it is my firm belief that the new concept sits within the parameters of the funding deed set down by RestartNSW.

“The Winney Bay Cliff Top Walk will formalise the existing informal trail into an all abilities access pathway, viewing area, and associated infrastructure. “The underlying theme of the design is to be indigenous culture. “The walk will provide stunning views of the Tasman Sea and the coastline to Norah Head, and will form an integral section of the 5 Lands Walk. “The completed infrastructure will be a tourist drawcard for the Central Coast and a boost to local business. “The funding deed does not detail the design of the project scope elements, but notes the elements to be delivered by the project to meet the project outcome. “Those desired outcomes will be delivered by the new concept.”

However, Crouch said that the design changes agreed to by Councillors included narrowing the width of the pathway, removing the bridge, and relocating the “culturally significant lookout”. “This decision contradicts the clear views of Regional Development Australia (RDA) Central Coast, the Darkinjung Aboriginal Land Council, the 5 Lands Walk Committee, as well as the expert recommendation from Council’s own staff,” Crouch said. “This decision rejects the majority view from community members that participated in Council’s recent public consultation process,” he said.