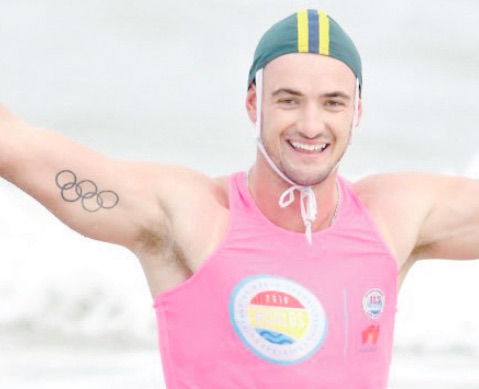 Fitzsimmons, and a large number of other Australian Paddle Team athletes, started their surf sport careers in surf lifesaving, and the now sprint kayakers enjoyed a hit-out in the ocean before starting their 2018/19 Olympic kayak season, at the Grand Prix 1, at West Lakes, Adelaide in December. Fitzsimmons took out the Title against a strong field of international competitors, despite very little preparation.

“These days, the kayaks are the priority,” Fitzsimmons said. “I got down to Adelaide a few days before racing, so I was doing a few sessions in the ski to get used to it again. “I definitely thought I had a good shot at being in the top five or so, but the field was so strong and it was pretty hard even in the heats and semifinals. “I am super happy with how the race went.

“I had a plan going into it, and everyone knew that with the conditions, whoever was first to the cans was going to be very hard to beat on the way in,” Fitzsimmons said. “All of us kayakers started out in surf lifesaving, so we always love going and having a race. “It’s also nice to give back to our surf clubs. “I know I definitely wouldn’t have gone to the Olympics without the help of Avoca Surf Lifesaving Club,” he said.

Fitzsimmons has been back in training for the sprint kayak season for the last month, after a short break following the 2018 ICF Canoe Sprint World Championships at the end of August, and will join the Olympic sprint action in the new year. “I’ve been back training for about four weeks now and I want to get some solid training down before Christmas, so I’m ready to go for the first few races in the New Year,” he said.