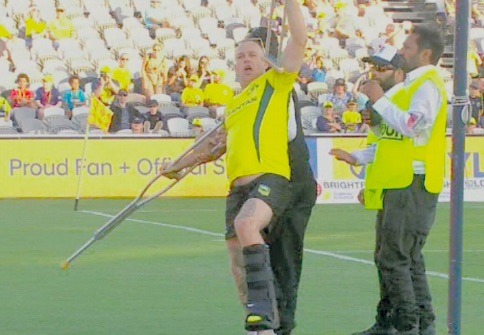 A pitch invasion which interrupted the Central Coast Mariners home game against Sydney FC on December 1, has raised questions about security at Central Coast Stadium.

Stadium Patrons are wondering how the man, who was on crutches and wearing a moonboot, was able to bypass security and interrupt the game. What started as a comical incident with the man brandishing his crutches and hyping up the crowd from the six yard box during the final 20 minutes of play, quickly turned ugly, with the man attacking security guards with his crutches, threatening to punch them and allegedly head butting one security guard after they attempted to escort him off the pitch.

The incident has raised safety concerns about the Stadium and the effectiveness of security at the venue. Game commentators even got involved, labelling the incident “some pretty slack stewarding” and asked the question punters were dying to know, “How is a man on crutches in a moonboot able to get from the stands over the advertising wall and onto the pitch?”

The Mariners are billed around $5,000 per home game by Central Coast Council, which owns the stadium, for security. In a media statement, Council said stadium staff are reviewing the incident and that safety of patrons was paramount to Council. “Staff are reviewing CCTV footage of the incident and will continue to work with all stakeholders on this matter,” the statement reads.

He went on to say that incidents such as this were not common occurrences at Mariners’ home games, and that the Mariners would be working closely with Central Coast Council and the police to see how the security contractor’s measures can be improved.

Mariners are back to winning ways