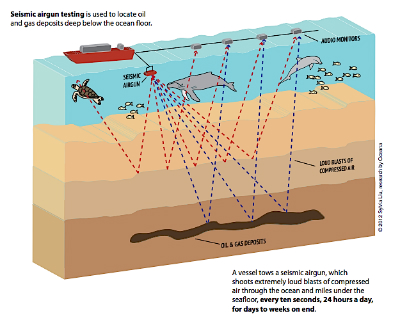 Three-dimensional (3D) seismic testing for natural gas deposits within a 500 square kilometre area off the Central Coast is likely to occur in 2020, and a $15m gas exploration well could be drilled off the Coast, between February, 2019, and February, 2020, under a Petroleum Exploration Permit called PEP11.

A work program on the Australian Government’s National Offshore Petroleum Titles Administrator (NOPTA) website, shows approval for one exploration well. Two-dimensional (2D) seismic testing was completed earlier in 2018, within the PEP11 area, which covers the Offshore Sydney Basin, between Newcastle in the North and Wollongong in the South. A summary of an Environment Plan approved by the National Offshore Petroleum Safety and Environmental Management Authority (NOPSEMA) to allow the 2D testing, indicated that the title-holders were aware of the environmental risks involved. The impacts of 3D testing are understood to be far more serious.

The current Federal Government supports the development of oil and gas drilling off the eastern shore of Australia, and uses a competitive bidding process to release “acreage” for exploration under ‘titles’.

PEP11, an active petroleum exploration title granted by the National Offshore Petroleum Titles Administrator (NOPTA), in August, 2017, covers approximately 4,568 square kilometres, and makes way for seismic testing and test drilling off the Coast. The area between Sydney and Newcastle already surveyed using 2D seismic testing was 20km offshore, around 70km north-east of Sydney, and 30km south-east of Newcastle, “offshore of the Central Coast region of NSW”, according to documents lodged with NOPSEMA.

Once a title giving the right to explore has been granted by NOPTA, along with a work plan outlining exploration activities over a number of years, the gas and petroleum companies have to submit an Environment Plan and a Safety Case to NOPSEMA.

Documents on the NOPSEMA website indicate that the regulator knocked back the 2D seismic testing Environment Plan on several occasions before giving the green light in April. The summary of that environment plan acknowledged the presence of internationally signifi cant migratory routes, resident populations, and breeding and feeding grounds for a number of Commonwealth Environment Protection and Biodiversity Conservation Act (EPBC Act) listed threatened and migratory species, including humpback whales, marine turtles, seabirds and migratory shorebirds.

A search of the EPBC Act Protected Matters Database uncovered: 36 listed threatened species (22 likely to occur in the survey area); 42 migratory species (23 considered likely to occur in the survey area and 23 also listed as threatened); and, 32 whales and other cetaceans;. However, the proponents argued, and NOPSEMA accepted, that “given the location and depth of the proposed survey area”, risks to identified species were deemed low to medium and, therefore, acceptable.

The Environment Plan for the 2D testing explained that “without adequate controls in place, sound emitted from the seismic or vessel sound source has the potential to impact cetaceans”: physiologically; by causing non-auditory damage to body tissues and induction of gas and fat embolism and auditory (sound induced) hearing loss; damage to the auditory system, permanent hearing threshold shift (PTS) and temporary hearing threshold shift (TTS); and mortality.

Perceptual damage was defined as “masking of biologically important sounds used for navigation, finding prey, etc”. The 2D testing was also acknowledged to interrupt normal behaviours such as feeding, breeding and nursing, and displacement from the area (short or long term). Similar risks were documented for fi sh, lobster and zooplankton. At a consultation meeting held in May, 2017, fishers expressed concern regarding the damage to local fish species and fishing activity due to the previous seismic surveys conducted.

“Stakeholders noted that fish from the areas were dead and rotting on the seafloor and coming up in the trawl nets.

“It appeared to these fishers that targeted fish species did not return to the area for many months afterwards. “Due to the use of the single gun and streamer, it was emphasised that there would be a lower likelihood for an impact in comparison to previous years. “However, several commercial fishers and recreational fishing representatives expressed that the area was considered too important and sensitive to risk the consequence of impact to the commercial and recreationally important species.” RL Energy, one of the title holders of PEP11, has recently announced its full commitment to preparation of an Environment Plan for the proposed 3D seismic survey.

“We have already commenced the challenging task of preparation of the Environment Plan, which is required before the 3D seismic can be acquired. “RL Energy believes there is potential to discover natural gas in PEP11 and anticipates the 3D seismic will confirm a … drillable prospect.”

RL Energy is a private unlisted Australian Company incorporated in January, 2017, to pursue exploration and production opportunities. The company’s principal focus is to acquire a 3D seismic survey in PEP 11 in the offshore Sydney Basin through an agreement with Asset Energy (subsidiary of Advent Energy Limited). RL Energy has agreed to pay for the preparation of the Environmental Plan (EP) at a cost of approximately $250,000, in addition to a 3D seismic survey capped at $4m.

“RL Energy anticipates the EP for the 3D seismic survey will be significantly more challenging than the EP which was approved for the recently acquired 2D seismic survey and the approval of the 3D seismic EP is a critical step to ensure that the future exploration potential of PEP11 is realised. “RL Energy believes it is highly unlikely that the Joint Venture will be able to attract signifi cant exploration capital or industry partners without 3D seismic, which is and has been considered the industry norm for offshore exploration drilling for many years.

“The RL Energy Directors, advisors and consultants are fully committed to ensuring that the proposed 3D seismic survey is conducted in accordance with the highest possible industry standards and takes into account considerations of all local stakeholders, including both the professional and recreational fishing groups, environmental groups and the local community. “Exploration for natural gas, one of the cleanest low emission fuels, is important for Australia, both economically and environmentally, but must be done in a responsible manner, and stakeholders will be encouraged to put forward their balanced views and concerns as part of the EP process that RL Energy will be conducting over the coming months.”