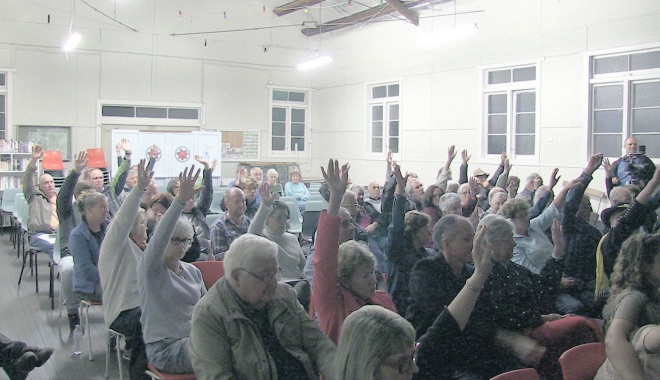 At a packed meeting at Mangrove Mountain Hall on Wednesday, November 28, guest speaker, Member for Gosford, Liesl Tesch, pledged that a future Labor Government would establish an independent inquiry to investigate the operation, regulation and approvals of the Mangrove Mountain Landfill site.

“This was the announcement the community has been waiting for,” said Mountain Districts Association spokesperson.

Stephen Goodwin. “If Premier Berejiklian is unwilling to order an inquiry into this threat to our water supply, then we know that if elected in March, a Labor Government will,” Goodwin said.

Guest speaker, Central Coast Council’s Mayor, Jane Smith, reported on Council’s initiatives in the establishment of an Advisory Committee on Mangrove Mountain and Spencer, and Council’s support for an independent inquiry.

Mayor Smith was limited in what she could say because the matter is in the Land and Environment Court. “We were appreciative that she agreed to speak and offer support,” Goodwin said.

Organisers of the meeting expected that the extreme weather conditions would keep people at home, but a large number of locals and numerous concerned residents from other parts of the Coast, from as far afield as, Budgewoi, Forresters Beach, McMasters Beach and elsewhere, turned up on the night.

“This was a great response to the front page article calling for community support for a campaign to protect the region’s water supply by opposing the reopening of the Mangrove Mountain landfill, that appeared in the last issue of Coast Community News,” Goodwin said.

The meeting was also well supported by local politicians and other members of Central Coast Council. These included Council CEO, Gary Murphy, Councillors, Kyle MacGregor and Louise Greenaway, and, Member for The Entrance, David Mehan.

In attending, David Mehan represented his community’s concerns. “David knows that this problem extends far beyond just the Mountain Districts and has an impact on the whole Central Coast community,” Goodwin said. “David has committed to encouraging residents living in The Entrance to write submissions opposing the renewal of the dump licence,” he said.

“Cath Connor, Greens candidate for the federal seat of Robertson, spoke on the Greens’ support for the community’s campaign, which was gratefully received.” In further comments, Liesl Tesch, gave an impassioned address throwing her full support behind the community opposition to the landfill through the campaign to get community members, and in particular children, to make a submission and send it to the EPA.

“Liesl’s commitment to supporting the campaign for community submissions currently being advertised by the EPA, greatly encouraged community members present at the meeting,” Goodwin said.

To assist residents to make a submission, Mountain Districts Association offers two avenues of support. Information on that is available from Stephen Goodwin on 0408 442 062 or on MDA website at mountaindistrictsassociation.com.au

The deadline for Submissions is December 20. “I urge all Central Coast residents, wherever they may live, to consider the future of the water supply for their children and their children’s children. It is that important.”

“Make a Submission now. “Parents should speak with their school Principals about encouraging pupils to make a Submission. “It can be short and simple – it will make the point.”