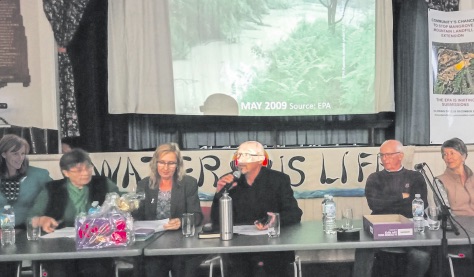 Over 100 concerned community members braved torrential rain to express their concerns about the future of the Mangrove Mountain Landfill, at a community meeting on Wednesday, November 28.

The Mangrove Mountain Landfill has a troubled history, punctuated by financial corruption and cronyism in the NSW RSL, according to the Member for Gosford, Liesl Tesch, who attended, and spoke at, the meeting. “The EPA has publicly acknowledged that the landfill represents a potential human and environmental risk, yet an application has been made to reopen the landfill and expand dumping by an additional 1.3 million tonnes of rubbish into the water catchment,” Tesch said. “The application submitted by Verde Terra Pty Ltd, an affiliate of the waste company, Bingo, featured in the ABC 4 Corners expose last year, has been rejected by the EPA and is now in the hands of the Land and Environment Court,” she said. “Should this application be approved, the waste company’s license will be extended for a further 10 years.

“There are only two potable water storage facilities for the entire Central Coast, and, at the meeting, concerned community members heard at length the potential dangers additional dumping at the site could cause, including the effect that leachate could have on our water supply. “Residents were all encouraged to visit the Mountain Districts Association website and make a submission to the Land and Environment Court to protect our water supply.” Tesch said she was supporting the community’s “Keep this crap out of your tap” campaign and encouraged all members of the Central Coast community to visit the Mangrove Districts Association website and have their say. “We need as many submissions as possible to show the developers that the Central Coast is not just a tip for the rest of the state,” she said.

“This is not just a fight for the people who live in the Mountain Districts, this is a fight for the whole of the Central Coast, for our children, our grandchildren, and beyond… our water supply is forever, and we must protect it. “The construction of an urban waste facility in a water catchment is illegal, and it is important that our community voices are heard loud and clear in the consideration of this application. “We have to show that this community won’t put up with more dumping on Mangrove Mountain.” Tesch said she again called on the Minister for the Environment, Gabrielle Upton, to support the NSW Opposition’s calls for an independent inquiry into the matter. “The Minister has the power to initiate an independent inquiry into this matter. “Our water supply is at risk.”

The community meeting panel consisted of Marilyn Steiner (Mountain Districts Association, Landfill Subcommittee), Stephen Goodwin (Mountain Districts Association, Landfill Subcommittee), Gary Chestnut (local Government consultant), Danny Wilmott (resident of 36 years and President of RSL Sub Branch from 2010-2017), and Stephen Rickards (owner of property adjacent to landfill). Guest speakers were Mayor Jane Smith, Greens Candidate for Robertson, Cath Connor and Liesl Tesch. Margaret Pontifex, OAM, Secretary of the Mangrove Mountain and Districts Community Group, who has been campaigning against the landfill since 1998 said, “The rest of the community and I are totally against any expansion of dumping at the Mangrove landfill site.

“This generation has no right to destroy the drinking water for the next generation,” Pontifex said. “We’re facing climate change and an uncertain future, we need our water catchments to stay intact for future generations,” she said. “My parents used to say that this generation is only here because of the last. “The next generation relies on us.” All submissions will be provided to the Court and the company for consideration. Submissions can be made to MMLSubmissions@epa.nsw.gov.au or through www.mountaindistrictsassociation.com.au and close on December 20.