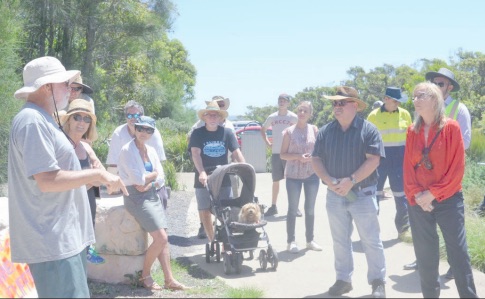 Three out of the 15 elected Central Coast Councillors were met by over 25 community members, when they attended their inspection of the Winney Bay Cliff Top Walk site at 2pm, on Monday, December 3.

According to Elaine Odgers Norling, one of the Winney Bay Warriors, the site visit, which Councillors voted in favour of at their last October meeting, was attended by Mayor, Jane Smith, and Clrs Jeff Sundstrom and Jilly Pilon. Mayor Smith offered the locals a question and answer session at the site on the morning of Saturday, December 8 at 10am. Odgers Norling said she urged residents concerned about over development of the area to contact all Central Coast Councillors before their next council meeting on Monday, December 10, and to attend the meeting.

She said Copacabana Aboriginal elder, John Oates, spoke of the significance of the Bullbararing headland with Mayor Smith during the site visit. Representative from the Avoca Beach resident, Mike Rubbo, showed Mayor Smith photos of walkways from around the world that were natural and considered world’s best practice. “Locals had many questions but were given few answers,” Odgers Norling said.