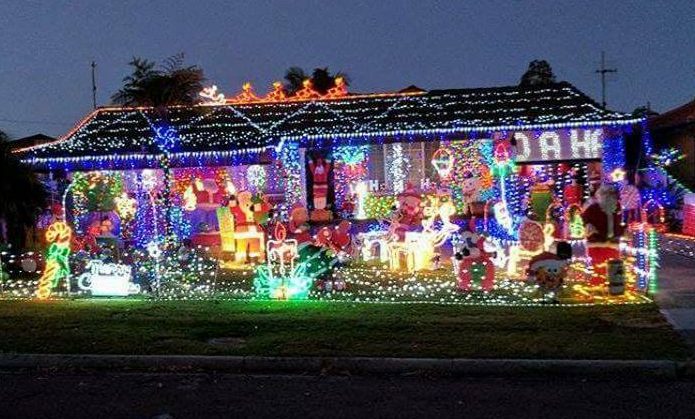 The time honoured tradition of taking the kids out Christmas light spotting has just gotten that little bit easier, thanks to a comprehensive Central Coast Christmas Lights Map, compiled by, Katie Stokes, the creative force behind Playing in Puddles.

Playing in Puddles is the Coast’s online directory for all things kids. Stokes created the first Central Coast Christmas Lights Map in 2017, and it proved extremely popular, so she’s brought the map back this year to help families across the Coast find the best light displays near them. “An evening drive in the weeks before Christmas is a ritual many Central Coast families love, and with our map outlining the best decorated homes, we hope to make it that much easier for you to plan your route,” Stokes said.

Residents in the former Wyong LGA are some of the most festive, with displays at: Bayberry Ave, Woongarrah; Settlement Dve, Wadalba; Darri Rd, Wyongah; and, Katoomba Ave, San Remo; all being named as must see displays. “Bayberry Ave’s, Matthew Redman, has been working on his computerised Christmas light display since February, yes you read that correctly, February, so it’s no surprise how incredible it is and that it’s one of the must visit sites on the map,” Stokes said. “It might only be the fourth year that Matthew’s had his lights computerised, but he’s an old hand at the decorations, with 18 years under his belt,” she added.

It takes Redman four weeks to set up the display each year. “I get a big buzz from the joy on the faces of kids and families seeing our Christmas Lights display go off,” Redman said. This year he has lights synchronised to songs and his display raises money for the Sydney Children’s Hospital and the Children’s Hospital at Westmead. “We experienced the loss of a very young child in our extended family,” Redman said. “The Children’s Hospital was superb with her ongoing care and the support that they provided during her brave fight, and to the family following her passing, so we wanted to give back,” he said.

Bayberry Ave have also implemented Santa on Saturdays, with the big man himself on site to welcome onlookers until December 22. Wadalba’s Settlement Dve display is another festive favourite with a difference. Cindy and Troy Byrne are the owners behind the famous display. “Troy is the mastermind behind it,” Cindy said. “He spends most of the year working on it, from designing or sourcing props to synchronising the lights to music on the computer.

“The actual assembly of the display takes about four weeks,” she said. This year they’ll be synced to All I want for Christmas is You, The Greatest Showman on Earth and more. Cindy promises their display will be bigger and better than ever. “This year we have twice the amount of lights on the outline, a new singing face, a new spinner and more trees. “We will have roughly 10,000 lights in our display,” Cindy said. The Byrnes’ daughter was diagnosed with Angelman Syndrome in 2015, and with their display, they hope to raise awareness of this neurological disorder, which causes intellectual disability, severe language impairment, movement problems and frequent seizures, among other symptoms. Last year they raised $1,700. In the spirt of Christmas and community, many of the Byrnes’ neighbours on Settlement Dve and adjacent Connemarra St also put on phenomenal light displays.

“Wyongah’s Michelle Gribble has been decorating her Darri Rd home for the past 10 years, and every year, her $8,000 display gets bigger and better as she adds to her collection at the Boxing Day sales,” Stokes said. “This year you’ll find more inflatables, more lights and a new snowy village scene. “Playing in Puddles visited Michelle’s display last year and we were amazed at how many fun and festive elements Michelle had managed to include on her front lawn. “There was Santa’s lounge room, complete with brick fireplace, loads of inflatables including Santa on a motorbike, oversized penguins, Santa piloting a plane, prancing reindeer and Santa driving a train, myriad fairy lights, a snow machine, and a ginormous Christmas tree adorned in tinsel, baubles, bows, lights, candy canes and, of course, a crowning star. “Michelle goes to all of this trouble each year to raise money for the Children’s Hospital, as her 14-year-old daughter, Hope, has Cerebral Palsy, and has spent a lot of time over the years, in and out of hospital.

“There will be a little wishing well out the front of the property with all money raised going to the Children’s Hospital,” Stokes said. “Until December 22, Michelle will also host a mini festival of fun on her lawn, with people dressed as beloved Disney characters. “Santa will also be giving out lolly bags to the children,” Stokes said. Rounding out the Wyong area’s must see displays, is the Heterick family’s Christmas extravaganza, on San Remo’s, Katoomba Ave. “The Hetericks have been putting lights up for 14 years, and Santa has been attending for the past three. “This year, the display is set to be bigger and better, with an extension of the archway and a net light that reads, Merry Christmas,” Stokes said. “Jody Heterick said she goes to all of this trouble, ‘to see the smiles on everyone’s face’ and we’re so very thankful she does,” Stokes added.

“The Hetericks go that extra mile, and even put out a special post box in the beginning of November so children can mail their letters to Santa. “Each letter receives a reply from Saint Nick himself (provided a return addressed envelope with a stamp was included with the letter) and this just gives us that warm fuzzy feeling,” Stokes said. The Heterick’s also have a special meet and greet with Santa and Mrs Claus where families can get a Santa photo taken. The Santa meet and greet will take place on December 14, 15, 19, 20, 22 and 23, from 8pm. Stokes’ Christmas Lights Map is live now on the Playing in Puddles website and visitors to the site are also able to add their own displays to the interactive map, as well as make recommendations of their own must see displays.