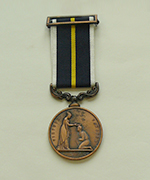 An Empire Bay firefighter has been awarded a 2018 Royal Humane Society Bravery Award.

Mr Jeffrey Morse was awarded a bronze medal for his role in responding to a gas leak in Haymarket on August 25, 2014. Fire and Rescue NSW crews attended a serious fire at Market City in Haymarket and were advised that a truck had severed a gas main in the basement loading dock and that a large amount of gas was escaping.

The immediate area was evacuated and attempts to locate the gas isolation valves were unsuccessful. The gas company advised that there was no gas shut off to the building at street level. Power to the building could not be isolated as the main switch room was also in the basement loading dock.

Mr Morse volunteered to enter the basement loading dock area to attempt to locate the main gas valve and shut it off. Wearing breathing apparatus, he and another officer, made their way to the bottom of the ramp and into the loading dock.

They discovered that their protection hose line was not long enough to reach the location of the leak nor the main valve room. To further compound their difficulties, painters had removed all signage from the doors in the loading dock area and the keys which had been provided to them did not fit any of the locked doors.

Despite the danger of explosion and the deafening noise caused by the escaping gas, they systematically forced entry into the locked doors and inside the third door they located the valve room and successfully shut off the main gas valves. NSW Governor General David Hurley presented the awards during a ceremony at Government House on November 8.