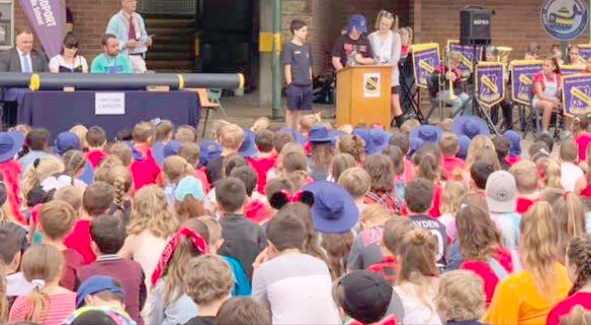 The milestone celebration was highlighted with the unveiling of the school’s time capsule, which had been buried 25 years earlier in 1993. The anniversary was themed 1993, and the community was encouraged to embrace the 90’s theme in celebration of the anniversary.

A range of special guests also attended on the day, including School Captains from the class of 93, and Woodport Public School’s oldest ex-student, 95-year-old, Gwen Beattie. Current students then got to bury items of their own in the time capsule, which was replanted for a future anniversary celebration in 2043. According to Woodport Public School Principal, Judy Boland, months of planning had gone into the anniversary celebration.

“Throughout last term, Jenni Bladwell, Louise Drummond, Sharon Williams and I have been involved in collating the past 25 years for our Woodport to Woodport and Beyond, history project,” said Boland. “It has been fascinating reviewing the changes, not only to the physical environment and the curriculum, but the rapid technological advances that have occurred in such a short space of time. “Many of you may not have known that the school has had an identity crisis during its 125-year history, with its name changing five times.

“It began as Woodport PS due to the timber and shipping industry of its day, and changed from Erina West to Erina and back to Erina West, and just before the centenary celebrations, reverted to the original name of Woodport PS. “The school was also once threatened with closure in the 70’s due to declining numbers, but thanks to our own Mr Day’s father, who was relieving principal at the time, and the strong community support, the decision was overturned,” Boland said.

A gala evening was also held on October 27 at the Gosford Japanese Gardens to celebrate the anniversary.