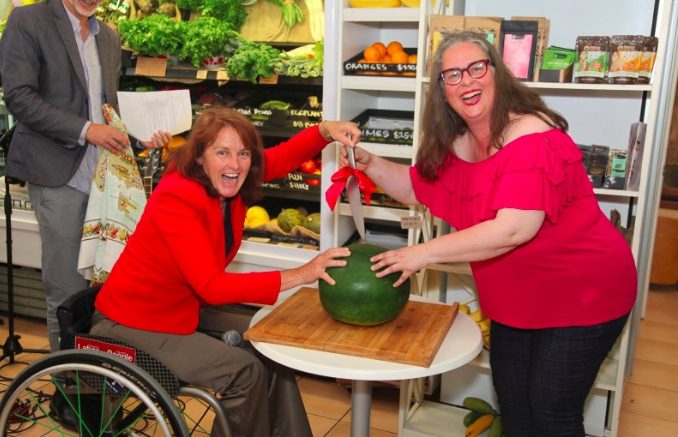 A new whole foods cafe and grocer was officially opened at Woy Woy during a function attended by 40 local business and community representatives on November 7.

The new business, Soulfood Cafe and Grocer, aims to make locals healthier and happier by supplying fresh food supplies, pre-prepared whole foods and nutritional advice. According to by founder and Owner. Ms Kristina Thompson, Soulfood had already established a loyal following of locals looking for alternative fresh supplies of organic fruits and vegetables as well as a cafe bar.

At the opening Ms Thompson told the crowd she took over the lease of the premises after working for the previous owner. Finding so much delight in helping people eat tasty and healthy food, she decided to take the leap into business herself. “Everything we make is plant- based and as fresh as possible” she said. We also have an in house nutritionist who is helping people rebalance their diets and live well.

We have also started making nutritious prepared foods for people who were looking for healthy alternatives to Supermarket frozen foods. “The idea being to help busy families, commuters and local people eat well and feel satisfied,” MS Thompson said. “We’re so pleased to be part of the growing, vibrant Peninsula small business community and I’ve been so blessed to find such passionate and committed young staff and enthusiastic suppliers,” she added.

Member for Gosford MS Liesl Tesch officially opened the cafe try cutting into what was a ceremonial watermelon which was later served to attendees.