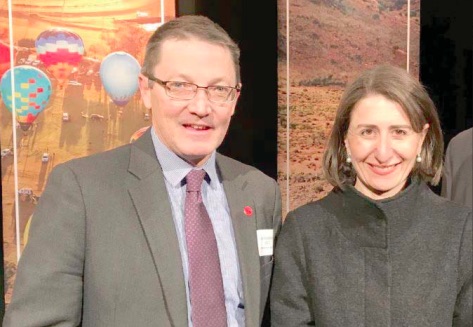 Parliamentary Secretary for the Central Coast, Scot MacDonald, with Premier, Gladys Berejiklian, at the launch of the 20-year vision

Fellow Member of the Legislative Council, Catherine Cuisack, won the preselection ballot, held on Saturday, November 10, by 23 votes to 18. MacDonald’s term of service will expire on March 1, 2019. Until that time, he is expected to continue to serve in the roles of Parliamentary Secretary of the Central Coast, Hunter and for Planning. In a facebook post, celebrating the birth of his “brand new grand daughter”, MacDonald said: “Thanks to everyone for all the warm messages after yesterday’s preselection. “I am looking forward,” he said.

“I serve out my term as Parliamentary Secretary to one of the best Premiers NSW has ever had. “It has been a unique privilege. “I hope I have made a difference. “The Hunter, Central Coast and North Province have been wonderful places to work in and with. “I particularly want to thank my wife, Aileen and our family.

“Too often they got the raw end of the deal with absences and distractions. “Best of luck to team Berejiklian and our National colleagues. “The Coalition deserves another term. “There’ll be no let up from me until March 23, 2019, but on to the next chapter.”