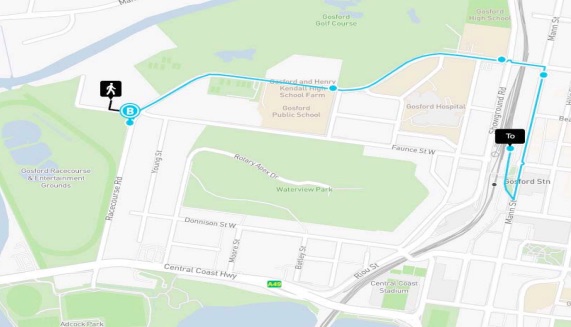 A total of $1.4m will be taken from the redevelopment of Adcock Park to provide 180 temporary car parking spaces at 10 Racecourse Rd, as part of a short-term solution to the parking shortage in Gosford CBD.

Funding will be sought from state bodies to partner with Central Coast Council to design and construct short term car parking options and new car parking stations, according to a resolution made by Councillors on October 29. Funding for design and construction of a s car park at 22 Faunce St, West Gosford, is to be sought from the NSW State Government. Councillors resolved to request the Chief Executive Officer, Gary Murphy, to arrange for line marking of the existing loop road in Adcock Park to maximise the parking spaces in the area.

Council will also implement a Park and Ride (Bus) scheme for six months, at no charge to the public, and will undertake a review after six months of operation. The Park and Ride bus initiative will be the subject of a promotional campaign to encourage its use. Three hundred parking spaces currently used by Central Coast Area Health on Showground Rd may also be utilised by Council. Deputy Mayor, Chris Holstein, moved a detailed motion based on an independent consultant’s report outlining potential strategies to alleviate the demand for parking in the Gosford CBD.

“It has been a long time coming to get this parking strategy moving,” Holstein said. “If you went through the 200-plus pages in the report, you would note that all day parking in Gosford CBD is at capacity and will be into the foreseeable future,” Holstein said. “There will be a shortfall of 500-plus spots in the immediate future, with an increase to 1,200 once the fi nance and tax building are at capacity, and that is with Kibbleplex still in existence.”

An expert consultant presented 11 strategies to address parking needs in the Gosford CBD. Three are considered short term opportunities: a new parking management system for the Baker St carpark; negotiating with Central Coast Leagues Club for paid parking on the top level of its car park; and, construction of temporary car parks on the CBD fringe. Council’s Business Enterprise Unit is implementing a new parking management system at Baker Street Car Park, which is expected to be operational by the end of January, 2019.

This will provide real time data on the utilisation of the car park and will open up some of the casual car parks which are underutilised during periods of the week. New smart parking sensors will be installed in Gosford CBD, covering Erina St East, William St, Albany St North and part of Mann and Baker Sts, which will allow members of the public to identify available parking spaces via an App. The installation of sensors is scheduled to commence in February, 2019, and completed by the end of June, 2019.

Clr Richard Mehrtens said a lot of consideration had been given to the existing Baker St car park and he was positive about making it a smart carpark, but asked whether consideration should also be given to extending its operating hours. Other medium and long-term strategies, which Council staff are continuing to investigate, included metred on-street parking within the commercial core. An expanded park and ride service linking with a parking station and shuttle bus at a location on the eastern side of the train line is also under investigation. Improvements to public transport, including changes to the train timetable, are also under investigation.

“Staff and the Traffic and Parking Sub-Committee have investigated a total of 27 sites in Gosford, Erina and Narara, to determine the feasibility of developing car parks. “Consultants have also been engaged to carry out specialist land survey, geotechnical investigation, provide planning advice and high level cost estimates to make an informed recommendation to progress with developing car parks at three sites in the short term. Sites for short-term car parks investigated and recommended were 10 Racecourse Rd, West Gosford (180 spaces), 1 Adcock Ave, Gosford (120 spaces), and, 22 Faunce St, West Gosford (250-900 recommended with further investigation and potential partnership with State Agency).  Other locations are being considered as sites for multilevel parking stations in the longer term.