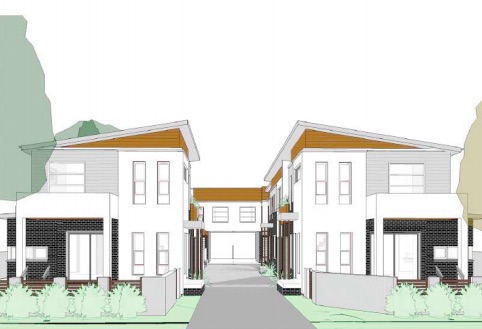 The application was lodged in May and Council received six submissions when it was advertised for public comment that month. During the assessment process, the number of units to be built was reduced from eight to seven. A fi nal assessment report by Council staff recorded variations with local planning controls of 55 per cent for side setbacks, and 17 per cent for rear setbacks.

Provisions for solar access were recorded as having noncompliances of 17 per cent and 13 per cent. The car parking was recorded as being deficient by 17 per cent. When initially assessed, the developer’s proposal did not comply with Gosford Local Environmental Plan 2014 (GLEP 2014) for floor space ratio. As a result the developer reduced its proposal by one unit and another remaining unit was to become a single-storey dwelling instead of having two storeys. It was also assessed to be short of the number of parking spaces required in the Gosford Development Control Plan 2013 (GDCP 2013) and was noncompliant for articulation.

“The design of the development would allow sufficient boundary setbacks to alleviate visual amenity, privacy and overshadowing impacts to the adjoining properties within the medium density residential zone,” the developer’s consultant argued as justification for non-complying setbacks. “The proposed setbacks would allow the incorporation of appropriate private open space areas behind front courtyard fencing that would have direct access to the living areas with appropriate solar access,” the consultant said.

The proposed garages provided 10 off-street parking spaces but no visitor parking. “The site is located within immediate walking or cycling proximity of public transport, recreation facilities, shops and schools and therefore warrants lower parking rate requirements and subsequently to provide onsite visitor parking,” the consultant said. Submissions from community members objecting to the proposal raised issues such as overdevelopment. “Most of these units are three bedroom and this will put a lot of persons, adult and children, into a confined area,” one objection said. Existing residents also expressed concerns about the parking shortfall. 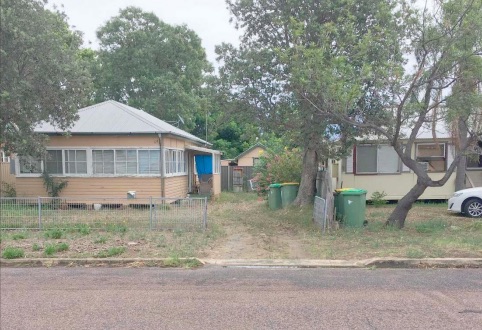 The Webb Road site from the street

“Having minimal parking not only effects the residents and visitors of the units but impacts on proximal residential homes. “The increase in vehicles which will have to park on our narrow road, with no footpaths, will greatly increase the possibility of a tragedy involving school children and parents with prams sharing the thoroughfare.” The subsequent removal of one unit from the plans did allow for one onsite visitor’s car parking space to be included. Another commented that the floor space ratio meant the originally proposed eight townhouses was excessive and would create overcrowding. Another expressed concerns about tree removal: “We are also not happy about the removal of two very large native banksias from the block which are home to many native birds and are very healthy trees and, of course, because the block is so overdeveloped there will be no space for any new tree planting.”