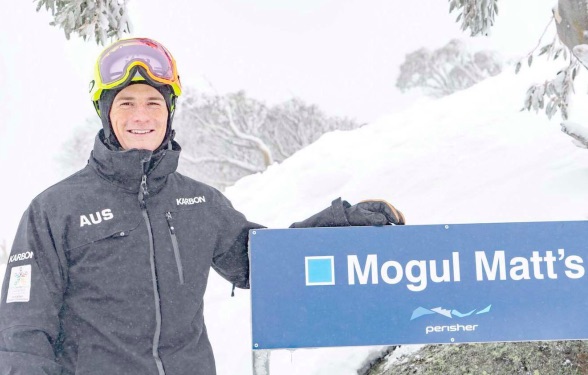 Perisher Ski Resort has named one of their ski runs after Narara local and long time skier, Matt Graham

Graham was on hand to unveil the renamed run, which was previously known as Cold Shoulder, accessible off the Brumby T-Bar. “It’s a great honour to be recognised today with the naming of Mogul Matts. “I’ve spent heaps of time skiing here as a junior mogul skier, in both training and competition.

“The run brings back a lot of great memories,” Graham said.

Perisher is Graham’s home mountain, where he first began his path to silver in PyeongChang. “I learnt to ski here when I was three years old, and I plan to be skiing here for as long as I physically can. “I got my first taste of Mogul Skiing when I joined the Perisher Winter Sports Club program in 2002,” Graham said.

Perisher’s Chief Operating Officer, Peter Brulisauer, said: “Matt is a huge role model for aspiring athletes and will always remain one of Australia’s most internationally successful skiers, and we are so pleased to name Mogul Matt’s after him”.