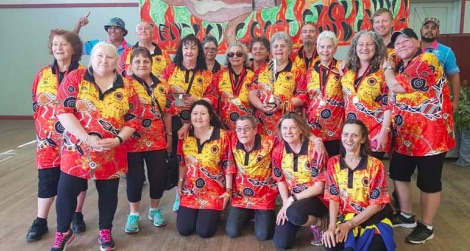 team from the Mingaletta Aboriginal Corporation

A team from the Mingaletta Aboriginal Corporation in Umina, called the Central Coast Wildfires, won a total of 13 medals at the 14th annual Koori Mini Olympics.

Competitors travelled to Wagga Wagga for the Koori Mini-Olympics as part of the Aunty Jean’s Chronic Care Program, competing against 14 other teams from across NSW on Wednesday, October 24. The Wildfi res were successful in their quest for medals during the day’s events, bringing home seven gold, two silver and four bronze medals for a total medal tally of 13, plus picking up the trophy awarded to the team who earned the most points overall. Mingaletta’s Aunty Dianne O’Brien, who organised the trip to Wagga Wagga and led the team to success, said: “I am so proud of our team and the good work that they have done for the last six months.

“Without our local clubs, we would not have made it,” she said. Aunty Joyce Dukes, who won the most medals of any competitor at the event with four gold and one silver, said that she considered the medals to be an early present for her 84th birthday, which is on Sunday, November 4. Team-mate Aunty Sue McCarthy said of Aunty Joyce’s performance in the Monster Quoit event, which had gone unresolved after two separate playoff rounds: “In the third round, she just got deadly and threw six out of six. “There was no mucking around. “All of her team-mates had tears in their eyes. It was just wonderful to watch.”