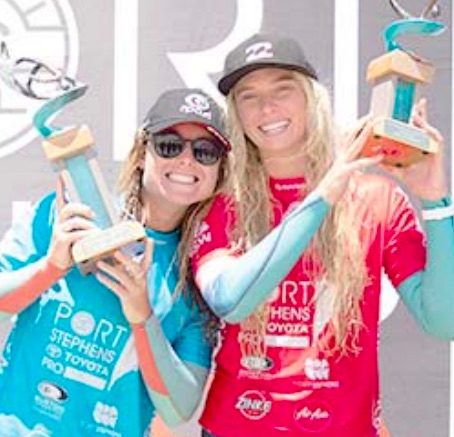 It was an exciting day of competition, as the race for spots on the 2019 Championship Tour almost reached its climax, with Callaghan up against Championship Tour competitor, Nikki Van Dijk. Van Dijk was the surfer to beat all week, building momentum through every heat of every round, and the fi nal was no exception. Callaghan had the jump on the more experienced Van Dijk, posting a solid 7.17 on her fi rst ride. She then backed it up for a heat total of 13.34, leaving Van Dijk chasing a couple of good waves. Sadly for Callaghan, with less than 10 minutes left, Van Dijk found the scores she needed, taking her second QS 6,000 win for the season, with a two wave total of 14.56.

At the same event last year, then 17-year-old Callaghan just missed the cut for the Championship Tour by one heat. A more relaxed, older and experienced Callaghan came back this year and knew the best way to give herself a shot at qualification was to win this year’s event. She did make the final and after coming second, she thought her chances of qualification had once again been dashed. Fortunately for her, the final appearance was enough to put her into 6th place on the QS rankings, and put her onto the Women’s WSL Championship Tour as a full-time competitor in 2019.

“Finishing second never felt so good,” Callaghan said. “I came second as a wildcard in France on the Championship Tour recently, but I think this one feels even better than that. “My friends and family on the beach knew that I was on next year’s Championship Tour, but didn’t tell me so it was such a surprise when I came in. “I’m stoked with how I performed this week and had such a fun time here in Port Stephens, so to leave knowing I’m on the tour next year makes it a dream come true. “I’ve wanted to be on the Championship Tour since I was a little girl, and I know it’s where I’m meant to be,” Callaghan said.

Surf’s up in the gallery

Sports – Around the Grounds