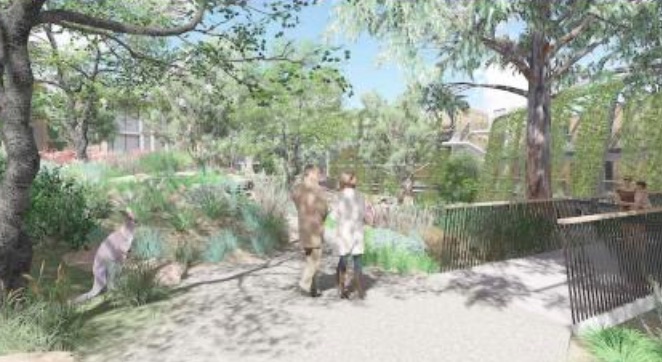 Artist impression of a future league club field in Gosford.

“As well as providing an exciting new public space for the Central Coast community to enjoy, this development will create momentum for the revitalisation of the region’s urban centre,” Cassel said. “We spent four weeks engaging with the Central Coast community and key stakeholder groups to ensure that we meet the needs of the region and its people,” he said. “A consistent theme evident in this consultation process was the desire to upgrade the space in a way that enhances the city and attracts people and businesses into the CBD.” The Central Coast Regional Development Corporation recently merged with the Hunter Development Corporation, which Cassel said would create a better service for both regions.

“As the new HCCDC, we’re better resourced and experienced to work with stakeholders such as Central Coast Council, to create opportunities and build developer and business confidence in our regional centres. “This new parkland demonstrates how the NSW Government is delivering on its commitment to revitalise the Central Coast, by creating vibrant public spaces, connected cities and thriving communities.” Concepts for the Leagues Club Field transformation were expected to be finalised by the end of 2018, with construction due to commence in September, 2019.