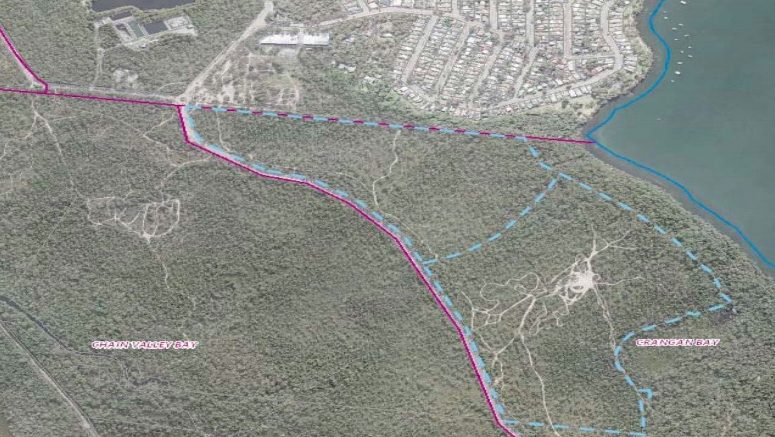 Councillors Doug Vincent and Kyle MacGregor have called up an application to modify the development of a 405-lot subdivision at 85 Kanangra Dve, Crangan Bay, so that it was considered at a public meeting of Central Coast Council.

This is the first time a planning proposal has been “called up” by two Councillors since the election of the Central Coast Council in September, 2017. The development application evolved from a Concept Approval by the Planning Assessment Commission under the provisions of Part 3A of the Environmental Planning and Assessment Act 1979 (the Act) which was repealed in 2011. It was then approved as DA/967/2013 by the Hunter Central Coast Joint Regional Planning Panel on June 5, 2014, and has a lapse date of June 18, 2019. It was subsequently amended in March, 2017, and August, 2018, for staging, and relating to the location of nest boxes. The owner and applicant, Scape Constructions Pty Ltd, wanted to defer the upgrade of the intersection at Pacific Hwy and Kanangra Dve until Stage 5 of the subdivision.

“The Kanangra Drive leg of the intersection will approach an unacceptable level of congestion during the release of Stage 3 which equates to 184 lots,” the staff report said. However, Councillors also decided not to adopt the staff recommendation. “The intersection of the Pacifi c Highway and Kanangra Drive provides the main access to the residential areas of Gwandalan and Summerland Point. “In recent years, new residential development has occurred and due to the increase in the residential population in the locality, it is important to ensure the intersection is operating effectively and does not reach saturation point thereby impacting on users of the road network. “Based on the traffic modelling, the RMS did not support the deferring of the intersection upgrade until Stage 5.

The matter was referred to the RMS who recommended that the intersection should be upgraded with works to be completed prior to the release of the Construction Certificate for the 185th residential lot which is Stage 4 and not be delayed to Stage 5 which results in the release of 328 lots. Council staff supported the opinion of the RMS but Councillors disagreed. The applicant submitted a traffic modelling report of the Pacific Highway and Kanangra Drive intersection to support the proposed modification. The report suggested the intersection had enough capacity to cater for an additional 300 residential lots. The total development area of the whole subdivision is approximately 62.28 hectares, excluding the road reserve. The northern boundary has approximately 700 metres frontage to the unformed road reserve while the western boundary is formed by Kanangra Drive.

Land zoned to the north of the subject site is zoned IN2 Light Industrial, RE1 Public Recreation and E2 Environmental Conservation. The southern and eastern boundaries adjoin conservation land that has been dedicated to the State Government which is zoned E1 National Parks and Nature Reserves. The Gwandalan area is located on the western shore of Crangan Bay, Lake Macquarie, and generally comprises low density residential development surrounded by bushland. A number of conservation areas are located in this area including Munmorah State Conservation Area, Wallarah National Park and Lake Macquarie State Conservation Area. The intersection upgrade was originally required to be undertaken before the release of the first residential lot (stage 2).

The modification, as recommended by RMS was considered consistent with the reasons for the granting of the original development consent and the provisions of the EP&A Act 1979 and was considered to result in the same development for which consent was originally granted.” However, Councillors were encouraged the support arguments put forward by community representatives who said the intersection upgrade could not wait.

Sporties advertises for merger, as developer joins board